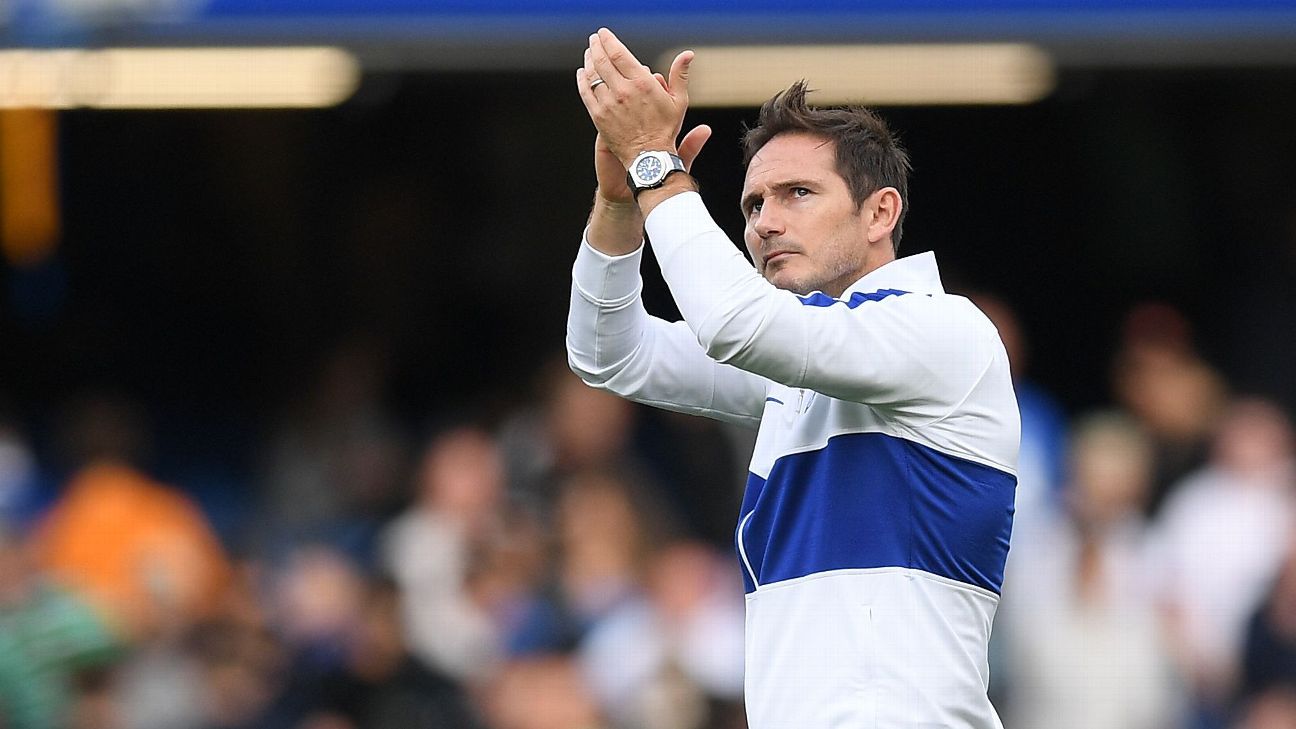 
LONDON — The venue was familiar. The vantage point was not.

Few people on the planet know Stamford Bridge better than Frank Lampard, who turned the West London stadium into his own back garden during a phenomenal 13-year Chelsea career in which he won 11 major trophies and became the club’s record goal scorer. But while he probably trampled every single blade of grass on the pitch during his time in Chelsea blue, he didn’t spend much time in the dugout. Of the 218 Premier League appearances he made at the Bridge, only 15 came from the bench.

The bench, though, is his new domain, and it was towards that area, just to the right of the players’ tunnel, that all eyes in the stadium turned when the new Chelsea manager emerged shortly before kickoff in his side’s 1-1 draw with Leicester City on Sunday. Wearing a white tracksuit top and dark blue tracksuit bottoms, he embraced Leicester manager Brendan Rodgers at the mouth of the tunnel before applauding all four sides of the ground, a chorus of “Super Frankie Lampard!” booming down from all around.

A photographic portrait of Lampard against a gold background adorned the front of the match programme. On the walk to the ground down Fulham Road, blue and white “SUPER FRANK LAMPARD” scarves hung from every stall. In the shadow cast by the chunk of wall from the back of the original Shed End, which runs along the stadium’s southern perimeter, fans posed for photographs in front of a picture of a beaming Lampard brandishing the Champions League trophy in 2012. Win or lose, this day was always going to be about him.

As it happened, Lampard spent most of the first half standing on the edge of his technical area, rather than sitting in the dugout, and it was from there that he watched Mason Mount give his side a seventh-minute lead that rewarded the hosts’ aggressive start to the game. When Wilfred Ndidi turned his back on the play after receiving the ball from goalkeeper Kasper Schmeichel, Mount pounced, nicking the ball off the Nigerian and brilliantly clipping a low shot past the flat-footed Schmeichel with his right foot.

Lampard punched the air with delight before turning to flash a telling grin at his coaching staff. Mount was with him on loan at Derby County last season, where Lampard launched his managerial career, and the 20-year-old academy graduate’s integration into the Chelsea first XI is a central pillar of the former England midfielder’s quest to make the West London club competitive despite the transfer ban they are under.

Lampard spoke out in defence of Mount after the midfielder’s place in the team was questioned by Jose Mourinho, Lampard’s former Stamford Bridge mentor, in the wake of Chelsea’s 4-0 defeat at Manchester United on the opening weekend. This was vindication, but it would be fleeting.

Chelsea’s transfer embargo meant that, contrary to previous seasons, there was only one new signing making his home debut. U.S. international Christian Pulisic had shown exciting glimpses of his talent in Wednesday’s penalty shootout defeat by Liverpool in the UEFA Super Cup, but here he cut a peripheral figure and was withdrawn with 20 minutes remaining. By which time the game had changed completely.

Rodgers is no stranger to Stamford Bridge himself, having started his coaching career at Chelsea under Mourinho’s tutelage, and as the game wore on his Leicester side assumed control.

Chelsea’s commitment to front-foot football — another tenet of the Lampard philosophy — meant they kept leaving space in front of their back four, which Leicester’s attacking players streamed into at will. After Hamza Choudhury and James Maddison had threatened, they levelled in the 66th minute when Ndidi found space between Kurt Zouma and Cesar Azpilicueta to head home Maddison’s corner from the right and atone for his role in Chelsea’s opener.

Lampard’s response was to introduce Willian and Mateo Kovacic in place of Jorginho and Pulisic, having earlier sent on Tammy Abraham up front, but Leicester came closest to winning it when the dangerous Maddison skipped past Emerson Palmieri and blazed over. Although Chelsea continued to push, the final whistle brought more relief than frustration to the home supporters.

“In the second half we left far too many spaces for them. That was the disappointing thing for me, that we couldn’t sustain that energy from the early part of the game.

“There are moments in games where we have to show personality. That’s something we can all work on. I don’t want to be an attacking team who can be given a sucker punch. There are strong lessons from today.”

Lampard said tiredness in the wake of the 120 minutes played against Liverpool in Istanbul “had to be a factor” in the way his team’s performance tailed off, but he refused to use it as an excuse and said he didn’t want to bemoan Chelsea’s transfer ban either. If these are the tools he must work with, then work with them he will.

Leicester’s powerful second-half showing will have given Rodgers encouragement that his side, who drew 0-0 with Wolverhampton Wanderers last weekend, have what it takes to upset the established order in the Premier League by turfing teams like Chelsea out of the top six.

“I thought a point was the least we deserved,” he said. “For us to play with that confidence was particularly pleasing. We played like a big team.”