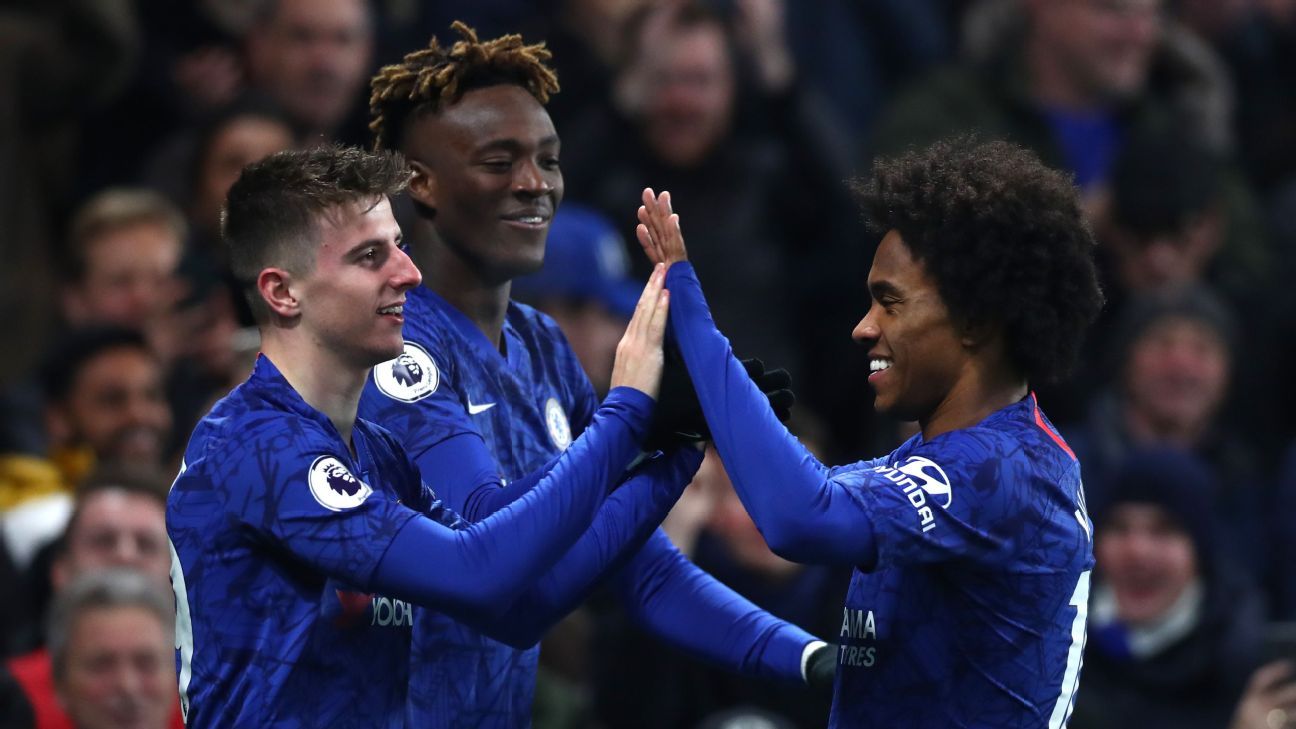 
Tammy Abraham scored a goal and set up another on his return from injury as Chelsea beat Aston Villa 2-1 on Wednesday to put their Premier League campaign back on track after two straight defeats.

Abraham, who played for Villa last season on loan, headed home from close range in the 24th minute after a lofted cross by right back Reece James, another of Chelsea’s home-grown players who have flourished under coach Frank Lampard.

Villa equalised with their first real chance of the game in the 41st minute when Egyptian Trezeguet headed a cross from his compatriot Ahmed El Mohamady on to his own foot and the ball crossed the line.

Chelsea regained the lead in style three minutes into the second half when Abraham chested a cross by Willian invitingly for fellow academy graduate Mason Mount to volley home.

Abraham, 22, missed Chelsea’s 1-0 home defeat by West Ham United due to injury and Lampard heaped praise on the forward whose form has earned him a call-up for England.

“He’s showing his all-round game, he stretches defences, he starts our press,” Lampard said. “He’s a personality that has grown in our dressing room every day with his enthusiasm and his will to win, and of course with players on such a good run, when they come out of the team you can miss them.”

Chelsea went in search of a third goal and Willian came closest to getting it when the Brazilian’s free kick was touched onto a post by Villa goalkeeper Tom Heaton. Chelsea keeper Kepa Arrizabalaga denied Ezri Konsa Ngoyo an equaliser in the dying moments.

The result left Chelsea in fourth place, six points above fifth-placed Wolverhampton Wanderers. Aston Villa are 15th and only one point clear of the relegation area.

Lampard, Chelsea’s record scorer who won three Premier League titles during his playing career at Stamford Bridge, said his side should have won more easily.

“I am happy but I want more,” Lampard, whose side are six points clear of fifth-placed Wolverhampton Wanderers, told reporters. “We have had a pretty good start because most people probably expected us otherwise.

“But I want more all the time and I think that the last week has been a good example of that for us.

“I saw us go to Manchester City and trade with them like a big team who was in and around that level, then at West Ham we were not. Today we recovered.

“That shows me where we are to have a real potential to getting where we want to be, but also aware of the little tough bumps in the road.”

Villa coach Dean Smith said his team were second best to Chelsea and started both halves on the back foot unlike in their previous game when they battled to a 2-2 draw at Manchester United.

“I feel that we can be as good as teams like Chelsea. We have got to be more consistent in our play to do that,” he said. “Tonight we weren’t as consistent as we were on Sunday against Manchester United.”

Former Chelsea captain John Terry, now Villa’s assistant head coach, stepped on to the pitch after the match to applause from the home fans. The former England captain played 717 times for Chelsea.