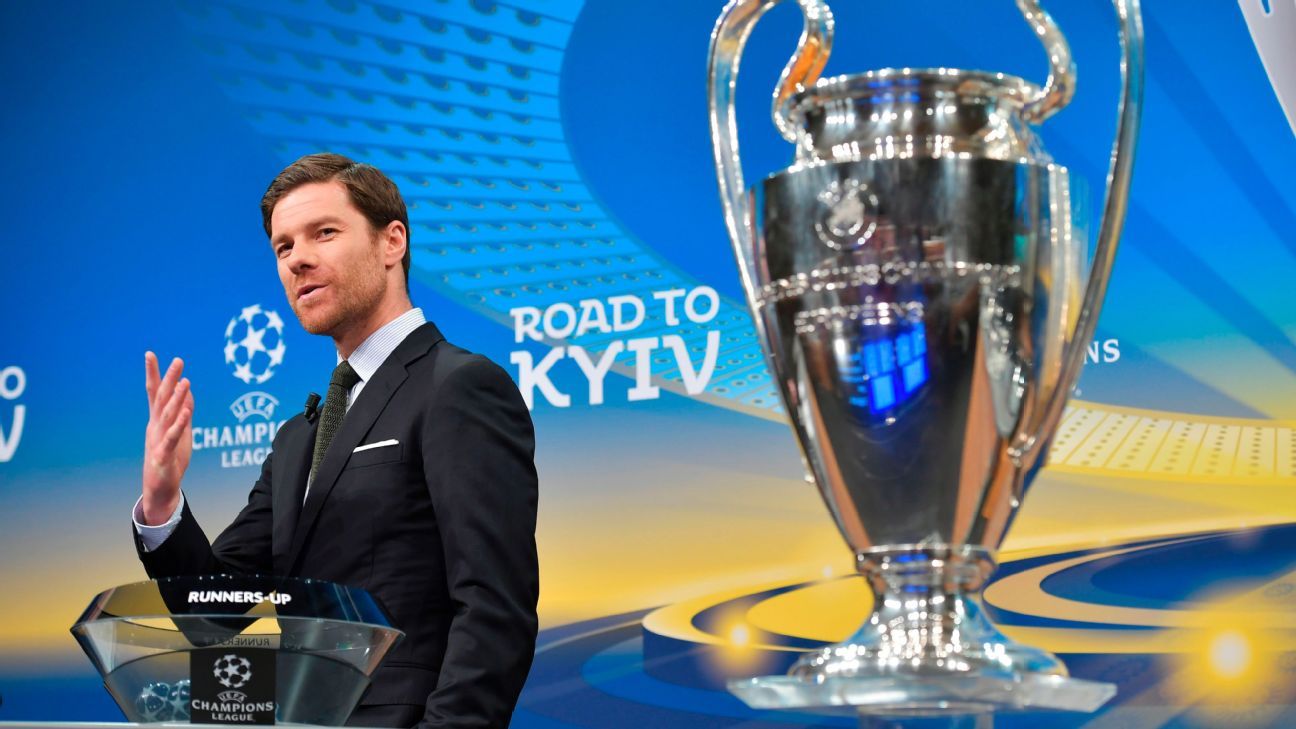 
What an absolutely sensational Champions League draw that was. Certainly the most tantalizing, the most intense and the most promising set of round of 16 contests that I can remember.

From the stone-faced reactions of Xabi Alonso each time he drew one of his former clubs or one of his ex-“enemies” from the vase, to the patent delight of Manchester City’s Sporting Director Txiki Begiristain when Real Madrid and Paris Saint-Germain were partnered: it was a smashing little piece of drama. But you can bet your mortgage on the fact that there are scores of “suits” at Real Madrid, PSG, Juventus, Chelsea and Barcelona who are cursing Alonso’s name.

They’re cursing him because there is a low-level grumbling among the big names in the European Clubs Association who want to prohibit the very idea that three from Real Madrid, PSG, Barcelona, Chelsea, Juventus and Tottenham are guaranteed to go out. There are some who favour the idea that the “mega-clubs” should be kept apart for as long as possible, so that they can guzzle for longer on the vast millions of Euros that are provided by the “marketing pool.” They will use this fabulous draw to try and argue that the competition is “worse” if it loses, say, Real Madrid, Barcelona and Juventus by March.

Nobody with a beating heart or a living soul can think that way. This is magical. Juve and Spurs have never met competitively: Wembley and Turin will be witness to some fabulous drama and whatever happens, it will be a brand-new experience for lovers of European football.

Ditto Sevilla and Manchester United. Yes, United fans, I know, Sevilla came to Old Trafford four years ago and won handsomely in Rio Ferdinand’s testimonial, but just one of the 23 players Los Rojiblancos listed for action that day remains at the club. It’s true, too, that this is a resumption of tactical jousting between Jose Mourinho and Eduardo “Toto” Berizzo — presuming that the latter’s current recuperation from cancer surgery continues as well as it has begun — which was so, so fascinating when they coached United and Celta Vigo in the Europa League semifinal last season.

However it’s fantastic for a club like Sevilla, which has punched above its weight so often in the past decade in winning a fistful of European trophies, to add a date with one of Europe’s all-time great clubs having already fought out two immense draws against Liverpool this season.

I have my doubts that Berizzo’s players are quite good enough to eliminate United, but Sevilla will win the singing. Trust me. Beg, steal or borrow to get a ticket for the first leg at the Nervion on Feb. 21: it will be the experience of a lifetime, I promise.

Now, to Madrid and PSG. Before you even consider the schadenfreude of the Ligue 1 leaders heading to the Bernabeu fueled by two players, Neymar and Kylian Mbappe, whom Florentino Perez tried desperately hard to sign, there’s the attraction of Ancien Regime aristocracy versus a young pretender with “New Money.” It’s the type of battle that has, across history, changed continents, sparked wars and altered the nature of democracy; in this instance, it only offers bragging rights and a place in the last eight.

Who wins that battle, and why, has the potential to be epic. The eye is drawn directly to this pairing, particularly as it comes just a year after PSG tripped and fell so spectacularly within inches of the winning post against another La Liga behemoth at the Camp Nou last season.

There are frissons everywhere you look. Besiktas against Bayern looks the most ill-matched tie, but given that the German champions-elect will go through, I’d bet, is there just the tiniest glimmer of a chance that Jupp Heynkes, who rode to the rescue just a few weeks ago, is suddenly going to be tilting at another treble?

Can they sweep the board domestically? Definitely. Does this draw allow them a sense of momentum in the Champions League? Yes again. Watch out, world: here come Bayern.

Liverpool vs. Porto is the meeting of clubs that have lifted this trophy seven times between them and merits respect simply for that. But again, I can right now hear the murmur of “this gives us a great chance of momentum” from Anfield. Jurgen Klopp’s team simply isn’t good enough to win this, not yet, but with giants knocking out giants elsewhere, stranger things have happened than the Reds popping up in a semifinal.

Basel will love the fact that the world’s No. 1 glamour side, Manchester City, unquestionably the most attractive team to watch right now, are coming to town as a reward for the way Raphael Wicky’s team beat Mourinho’s United in order to ensure qualification. A Manchester double for Basel? Surely not.

Shakhtar, Zorro masks and all, can dream of defeating Roma and making it to the elite last eight. Winners against a Napoli side who they eliminated, but who have already defeated Roma once this season, the club from Ukraine, which isn’t even able to play at its home stadium thanks to the brutal circumstances in Donetsk, have both a glamour tie… and a chance. But even with the shimmering, footballing sexiness of PSG tilting at Madrid, it’s the Chelsea vs. Barcelona tie that is the “European Clasico.”

This meeting is now very close behind Europe’s all-time feud (which is between Bayern Munich and Real Madrid) to being the most heated, most dramatic, most thrilling, most remarkable and most controversial ever. There are contenders, yes I acknowledge that, but think of this. Fifteen times they’ve met competitively and it’s balanced at five wins and five draws each.

Virtually every collision has been full-tilt and, almost always, historic. From the first time they played, in 1966, when Chelsea were staffed by footballing greats like Terry Venables, Peter Osgood, George Graham and Charlie Cooke and their Uefa Cup semifinal went to a replay that Barca won 5-0, to the 1999-2000 curtailing of the Blues’ first European Cup participation in 44 years after a thrilling extra-time 6-4 defeat.

There’s Anders Fisk quitting his refereeing career after threats that followed drama at the Camp Nou, Didier Drogba raging to the TV cameras in 2009, Andres Iniesta hitting what was at the time the goal of his life to eliminate Guus Hiddink’s Chelsea, Lionel Messi vs. Asier Del Horno, Pep Guardiola announcing his resignation having lost to Robbie Di Matteo’s side.

Where did Frank Lampard score the goal that he’s always told me is the greatest of his career? At the Camp Nou for Chelsea. Which Ronaldinho goal, of all his diamonds, transfixed the world most? Probably that hokey-cokey, shake and shimmy before toe-poking the ball past Petr Cech at Stamford Bridge.

Or how about 10-man Chelsea eliminating Barcelona at the Camp Nou having trailed 2-0 in 2012? Or that “fun in the mud” 2006 masterclass, won by Frank Rijkaard’s Blaugranas, in what remains one of their all-time great European away performances.

The sublime combination play between Ramires and Lampard, which produced probably the best goal I’ve seen across this magical series of contests. And that first semifinal of 2012 when Barcelona laid siege to Cech’s goalmouth, hitting the woodwork twice, seeing the ball cleared off the line and putting 19 efforts at goal but losing 1-0 thanks to — guess who — Drogba.

But let’s go back to Messi. This all-time genius of our sport has played over 600 times for Barcelona. During that reign of terror for opposing defenders and keepers, there is no club other than Chelsea against whom he’s played five times or more and not scored. Furthermore, in his eight Champions League matches with Chelsea, against three different managers and two different keepers, he’s not only failed to score but he’s won just once.

In Messi’s career there were probably only three anomalies: not yet winning the World Cup, failing to score against Chelsea and never scoring against Gianluigi Buffon. The latter disappeared in this season’s group stage, the first remains to be seen. But, look out Thibaut Courtois. That’s my friendly advice.

What a tie for those two teams and what a draw overall.