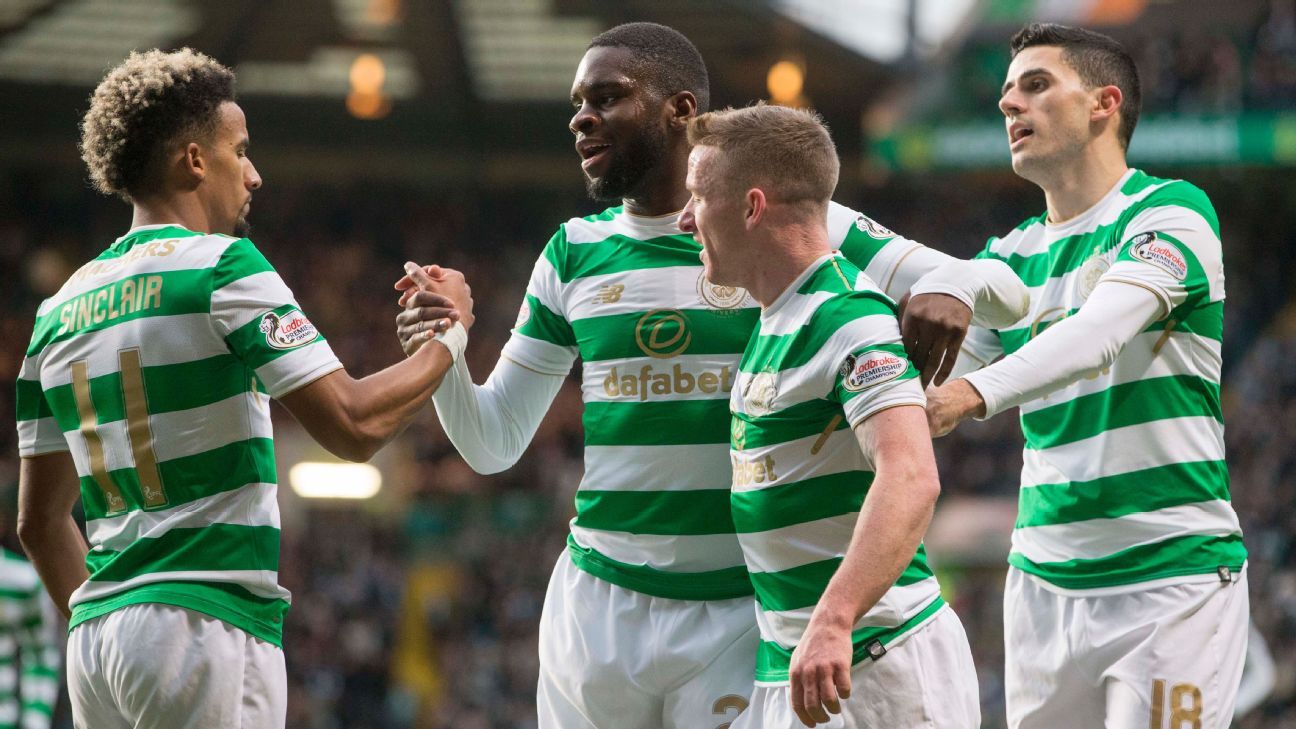 Odsonne Edouard grabbed a stunning hat trick as Celtic cruised to a 5-1 Scottish Premiership win over Motherwell at Parkhead.

The 19-year-old striker, on loan from Paris Saint-Germain, was one of six changes made by boss Brendan Rodgers with an eye on Tuesday’s Champions League game against Anderlecht and he struck from close range in the 16th minute and then from the edge of the box before the break.

In the third meeting between the clubs in a week, Well’s half-time substitute Elliott Frear scored against the run of play in the 65th minute but Hoops replacement James Forrest restored Celtic’s two-goal advantage and then completed the rout after Edouard added a fourth with six minutes remaining.

The champions extended their unbeaten domestic run 67 games to go seven points clear of Aberdeen at the top of the Scottish Premiership.

With fellow Frenchman Moussa Dembele working his way back from an ankle injury and Leigh Griffiths starting on the bench, Edouard led the line with Jonny Hayes, Kristofer Ajer, Olivier Ntcham, Tom Rogic and Scott Sinclair also back.

The home side took the lead with their first real chance.

Ntcham set up Sinclair and his cut-back from the byline was tapped in from six yards by Edouard for his first goal at Celtic Park in his third start.

His second in the 33rd minute was just as straightforward, taking a Rogic pass and approaching the Well penalty area before driving through the legs of back-tracking Motherwell stand-in captain Peter Hartley and into the far corner.

Celtic skipper Scott Brown had earlier been booked for a foul on Louis Moult and then had to come off for treatment to his face after a challenge by the Motherwell striker and there were occasional signs that the game could boil over.

Four minutes from the break Rogic had the ball in the Well net but a very late flag by the assistant referee ruled it out, to the anger of the home fans.

Carl McHugh and Frear came on for the start of the second-half but Celtic continued to dominate.

Edouard headed a Sinclair cross wide from eight yards before Hayes, an endless source of danger down the right, scuffed an effort wide and Motherwell keeper Trevor Carson kept out a Mikael Lustig drive.

In the 64th minute Carson made an unorthodox save from an Ntcham free-kick before Tierney hammered the rebound wide.

It all appeared easy enough for the Hoops but they were stunned a minute later when, in a sporadic Fir Park attack, Frear stabbed in a Richard Tait cross from inside the six-yard box.

Rodgers brought on Callum McGregor and Forrest and in the 75th minute the latter cut in on to his left foot inside the box before firing into the far corner.

Carson tipped a Forrest shot over the bar before, in the 84th minute, Tait’s headed back-pass to his keeper was pounced on by Edouard who slipped it past Carson.

And there was still time for Forrest to bend in the fifth with the outside of his boot.

Bayern boss Flick on Davies losing starting spot Form has dropped
Tottenham’s lack of ruthlessness hurt them vs. West Ham and will stop them competing for trophies
Bayern Munich rebuild on a budget as Bundesliga largely looks to loans in transfer market
Messi not at his best this season
WSL confusion Brighton player booked twice not sent off