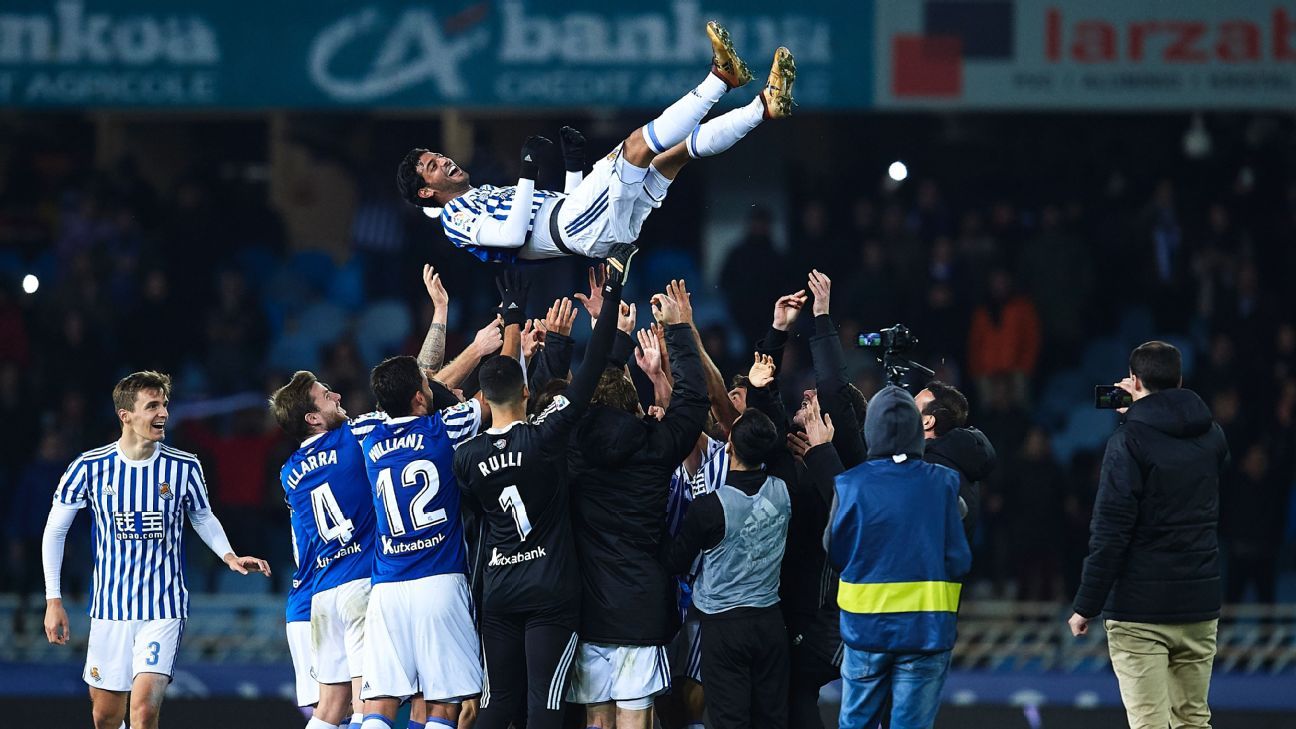 
Carlos Vela has achieved what very few Mexican players in history have accomplished in Europe: the 28-year-old established himself and earned respect in a six-year cycle at Real Sociedad, which places him second as the foreign player with the most games for the club.

The reaction to Vela calling time on his career in Europe to move to new MLS franchise Los Angeles FC has ranged from low key to lament outside the United States.

In the Spanish sports newspapers on Thursday, Vela’s farewell for Real Sociedad and the 3-1 victory over Sevilla — including a final late goal from the Mexican — wasn’t a priority. The Mexican forward’s last game in La Liga made page 18 in Sport, page 22 in Mundo Deportivo and 26 in Marca.

Obviously, with La Liga’s Clasico between Real Madrid and Barcelona on Saturday, and Antoine Griezmann’s potential transfer from Atletico Madrid to Barcelona, attention is focused elsewhere.

It was only in Anoeta that Vela’s farewell game was hyped. There were glowsticks ahead of the game, a banner was hung from the stands and the players took it in turns to congratulate a player who was clearly a popular member of La Real’s squad and an important part of the club’s history.

But there is a certain irony that many more column inches in Spain this week have been handed to Vela’s friend Griezmann than to the Cancun native. The duo were sensational for Real Sociedad over the 2012-13 and 2013-14 seasons, propelling the club to a fourth and then seventh-place finish in La Liga.

But while those seasons were a platform for a move to Atletico Madrid for Griezmann, where he then established himself as one of the best players in the league, for Vela it represented a peak. He hasn’t reached those heights since.

Vela was nominated for the “Best Striker of 2013-14” award alongside Cristiano Ronaldo and Diego Costa, and it appeared that his star was on the rise. The only significant cause of friction was the player’s preference not to play for El Tri. It was the fact Vela was so good that hurt Mexico fans.

Since that nomination, however, Vela scored 24 league goals; while Griezmann contributed 65 at Atletico Madrid — though it should be remembered that if you watched Real Sociedad over the course of the 2013-14 campaign, you would have thought Vela had the higher ceiling in terms of development.

And that’s the dilemma when you look back at Vela’s lengthy stint in Europe. Playing 250 games with a club like Real Sociedad and netting 73 goals, mainly from the wing, merits applause.

But almost everyone who has worked with the striker has been taken aback by his talent, including Arsene Wenger, who signed him for Arsenal from Chivas in 2005 and sent him on loan four times before eventually selling him in 2012. There is a sense of lament back in Mexico that Vela’s career didn’t shift up a couple of gears and include a move to a Real Madrid or another European super club. But it seems it was his own fault.

“To me it seems a ‘waste,’ but I understand the reason perfectly: the lack of passion,” was ESPN’s David Faitelson’s take. “And without passion there is no hope, in football or life.”

Perhaps the most stinging comment about Vela’s European adventure came from his own brother.

“Carlos lacked a little more ambition to want to show what he’s got,” Enrique Vela told ESPN. “In the Spanish league, in the best season he had, they put him up there with Cristiano Ronaldo and Lionel Messi, but we haven’t seen the real ceiling that Carlos could’ve reached.”

Now comes Vela’s MLS adventure. Moving to a league inferior to La Liga in terms of quality should mean Vela succeeds with a degree of ease and comfort. He’ll be able to entertain, earn good money, live in the same city as his friends from Los Angeles Galaxy — Giovani and Jonathan dos Santos — and be closer to his family back in Mexico. The appeal is obvious.

A section of Mexico fans will criticize Vela’s decision and the movement of El Tri players from Europe to MLS is not an ideal situation for the national team. But if more young Mexicans took a risk and got out of their comfort zone to move to Europe like Vela did aged 18, the weight of expectation would be shared around.

Perhaps then there wouldn’t be so much lament about a player who has achieved more in Europe than all but a handful of his countrymen.

Messi 9/10, Fati 8/10 as Barca rout Hungarian champions Ferencvaros
Bayern boss Flick on Davies losing starting spot Form has dropped
High-flying Leeds, Villa suggest this Premier League title race could be the best one ever
How a European Super League could happen and spell doom for the Champions League
Ruben Dias could fix Man City’s defensive woes despite being young for a central defender