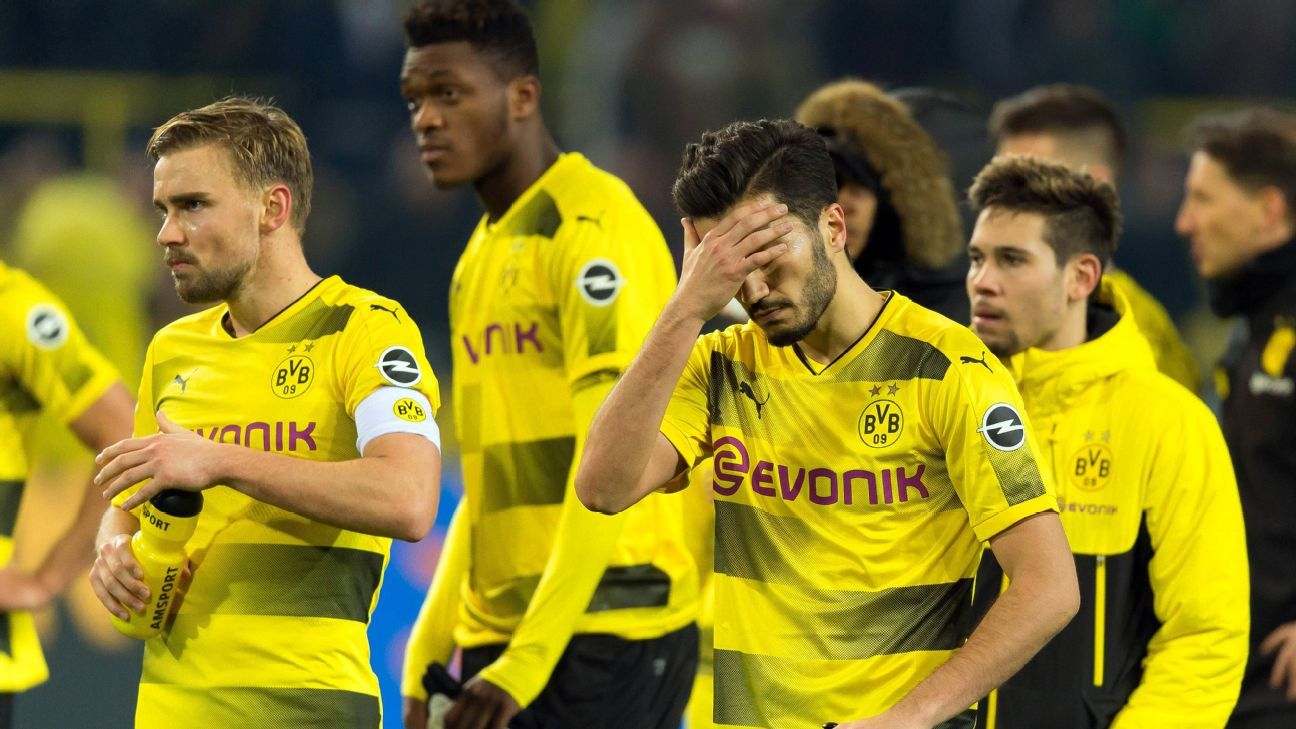 
Revierderby Disneyland turned into a horror show for Borussia Dortmund on Saturday against bitter rivals Schalke, as the Black and Yellows let a 4-0 half-time lead slip.

It was an epic collapse by Dortmund that is symbolic of their season overall. A 4-0 lead in a derby with an electric Westfalenstadion should lead to three points, but what happened says a lot about how brittle Peter Bosz’s team are mentally and tactically.

On Sunday, BVB CEO Hans-Joachim Watzke will have a lot of explaining to do at the members’ assembly. After the game, sporting director Michael Zorc told ESPN FC: “We are speechless. We first have to make sense of this game. I beg for your understanding.”

Dortmund have only one win from their last 10 matches. A resounding victory over Schalke could have brought their freefall to a halt, but after yet another huge setback it is tough to say how they will recover.

Schalke coach Domenico Tedesco said in the postgame news conference that he asked the fourth official whether they could end the game after the first 45 minutes. That is how far away his side looked from a comeback.

Bosz does deserve credit for his game plan, which saw Dortmund field a 3-4-3 with Christian Pulisic and Raphael Guerreiro acting as wing-backs, while holding midfielders Julian Weigl and Nuri Sahin meant that Dortmund had more passing options in midfield and more security in the build-up phase.

Where to begin? “We stopped playing football in the second half,” was as far as Bosz would go. All it took was a simple long ball in the path of Guido Burgstaller in the 61st minute and, with centre-back Sokratis Papastathopoulos caught ball-watching, as so many BVB defenders have been in past games, the Schalke striker had all the time in the world to lob the ball over Roman Weidenfeller.

Four minutes later, Sahin left Amine Harit wide open to pick a cross from the air for a tap-in. Bosz switched to 4-3-3 but the hosts lost complete control. With Pierre-Emerick Aubameyang sent off for a double booking after a needless challenge in the the 72nd minute, the momentum was 100 percent with the guests and calamitous defensive errorsreminded of BVB’s Europa League collapse at Liverpool in the 2015-16 season.

5 — He gets credit for his tactical approach in the first half, but Bosz blew it with his substitutions. It remains to be seen whether he will still be at the helm next week in Leverkusen.

GK Roman Weidenfeller, 7 — The veteran goalkeeper filled in for the concussed Roman Burki and made two great saves in the second half, but it wasn’t enough.

DF Omer Toprak, 4 — In the first half, Toprak was too often too deep. In the second, he was mostly standing around, like everyone else.

DF Sokratis Papastathopoulos, 3 — Caught ball-watching when Schalke scored their first and rooted to the ground as Daniel Caligiuri scored a third.

DF Marcel Schmelzer, 5 — The captain had a strong first half, with the most touches of the team. In the second period he became a ghost.

MF Christian Pulisic, 5 — The U.S. international did well as wing-back in the first half and cross led to the opening goal. But he had to fill in for Aubameyang in the final 15 minutes, which was an unforgiving task against the towering Naldo.

MF Julian Weigl, 4 — Every time Dortmund stop playing football, Weigl is to be taken off the field as he has nothing to add at that point.

MF Nuri Sahin, 5 — Was a passing outlet, showed a lot of fight and assisted a goal in the first half. After the break, he left Amine Harit open for a tap-in. Sahin’s lack of pace hurt the team even more after they were one man down as he failed to close down gaps in the middle.

MF Raphael Guerreiro, 7 — Netted a wonderful strike to make it 4-0 and was effective in build-up play as a left wing-back. The Portuguese international had a great game, but ran out of steam in the second half and his substitution in the 83rd minute came too late.

MF Mario Gotze, 7 — Scored BVB’s third with a header after 20 minutes. Gotze gave his team a lot of structure from the left wing. He had to come off injured in the 78th minute.

FW Andriy Yarmolenko, 5 — The Ukraine international looked on top of his game early on, sending a few dangerous crosses into the box and playing some audacious back-heel passes. But the 28-year-old looks terribly unfit and has been a liability in BVB’s second-half pressing in recent games.

FW Pierre-Emerick Aubameyang, 6 — Played incredibly well in the first half, contributing with a goal and an assist. However, Dortmund arguably would have won the match without him getting sent off. Both bookable challenges were somewhat ill-advised and there is nothing to argue against his sending off.

DF Marc Bartra, 3 — Came on for a tired Yarmolenko in the 68th minute, but his long balls from the back did not help and he only completed two out of seven passes.

MF Gonzalo Castro, NR — Replaced Gotze in the 78th minute and was in the referee’s book 20 seconds later for a nasty challenge on Harit.

DF Dan-Axel Zagadou, NR — It was a horrendous move by Bosz to field Zagadou as left-back in the last 14 minutes. The plan was for him to win headers as the tallest player in the box, according to Dortmund’s manager, but the youngster was embarrassed by a simple feint by Caliguiri and also lost Naldo in stoppage time.