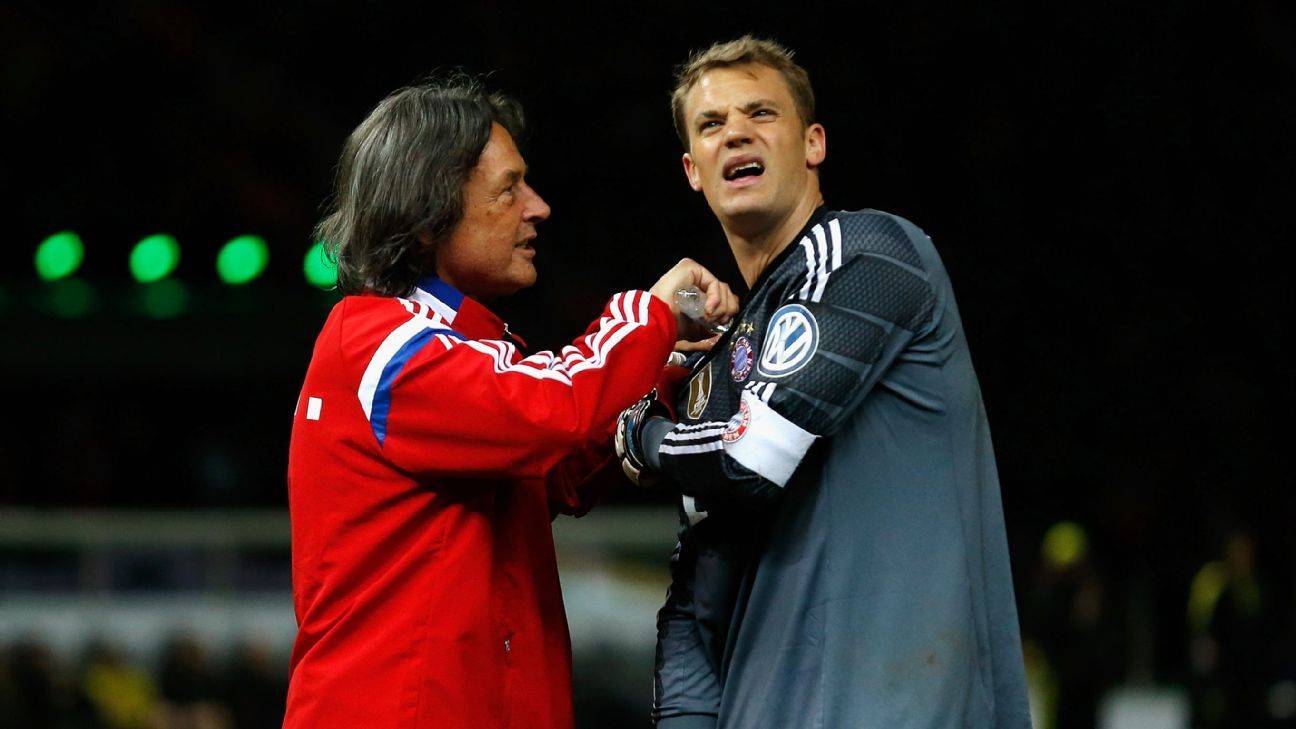 
Aside from his wedding, it has been a year to forget for Bayern Munich and Germany captain Manuel Neuer. The goalkeeper will be sidelined until 2018 following three fractures of the foot in a matter of months.

The 31-year-old went under the knife for the first time at the end of March but was rushed back into action just two weeks later for the Champions League quarterfinal first leg against Real Madrid in Munich amid doubts over the quality of backup keeper Sven Ulreich.

Following Javi Martinez’s dismissal, an inspired Neuer almost singlehandedly kept a Robert Lewandowski-less Bayern in the tie with a string of majestic saves. And Bayern’s Champions League dream was still very much alive after 90 minutes of the return in the Bernabeu, forcing extra time with a 2-1 win, with a half-fit Lewandowski taken off just before the end of normal time.

Then Neuer suffered another fracture in extra time, with 10-man Bayern shipping a further three goals as they were unceremoniously dumped out of the competition by the eventual winners, but not before numerous complaints about the referee, offside goals from Cristiano Ronaldo and the validity of Arturo Vidal’s red card.

With Neuer vowing to return for the start of the campaign, Bayern — once bitten, twice shy — were in no hurry with their new captain over the summer. Spared the elongated summer tour of Asia to continue his recovery, the keeper got hitched and enjoyed a relaxing honeymoon.

He eventually made his comeback as Carlo Ancelotti’s captain against Werder Bremen on Aug. 26, playing four games and keeping three sheets, breached only in the tame 2-0 loss at Hoffenheim, Bayern’s sole Bundesliga defeat this season.

Then the unthinkable happened. On the eve of a trip to play his boyhood club Schalke, Neuer suffered “a repeat hairline fracture of the metatarsal in his left foot” during a training session on Sept. 18.

Another operation inevitably followed the next day, ruling him out until the New Year. In the meantime, Neuer has revealed that he has been playing with a metal plate in his foot for years, since picking up a similar injury at Schalke in 2008. The keeper didn’t appear particularly perturbed but warned it could take him six months to heal properly — worrying for Germany, with a World Cup defence on the horizon next summer.

Understandably, this was not particularly good news for Bayern either — or an under-pressure Ancelotti. Ulreich struggled to fill Neuer’s rather large boots in goal. He was horribly exposed in the 3-0 loss to Paris Saint-Germain in the Champions League and also inexplicably allowed a soft free kick past him against Wolfsburg as Bayern suddenly did very un-Bayern like things and let a two-goal Bundesliga lead slip at home.

With no Neuer to save the day, these errors were the final nail in the coffin for Ancelotti and proved his last game in charge in each respective competition.

However, since taking over for a fourth term, Jupp Heynckes has not only revitalised the German champions’ fortunes but Neuer’s shaky backup suddenly looks as safe as the Bundesbank in goal.

Despite admitting to ESPN FC he is “no Neuer,” Ulreich has kept a string of clean sheets and his crucial DFB Pokal penalty shootout save from RB Leipzig’s Timo Werner kept Bayern’s Treble hopes alive.

Just four league games into Heynckes’ fourth term, Bayern boast a healthy four-point lead in the Bundesliga, and also sailed into the Champions League knockout stages for a 10th straight season, following home and away victories over Celtic.

All would appear rosy in the Bayern garden, if not for a few unseemly squabbles in the medical department. Dr. Volker Braun, 44, an orthopaedist and trauma surgeon, resigned on Monday after nine years at the club, having assumed responsibility for the first team two years ago following the ugly departure of Dr Hans-Wilhelm Muller-Wohlfahrt.

“Mull” and his entire staff left the club in April 2015 after 38 years of service, following disagreements with then-boss Pep Guardiola over the treatment of injured players.

German tabloid Bild claimed that Dr. Braun had not applied “ideal treatment methods,” meaning injured stars such as Neuer spent extended spells on the sidelines. Bild also suggested that Dr. Braun only left the club to be spared a messy sacking by a less-than-amused Bayern hierarchy.

Nevertheless, surely the club knows the quality of its medical staff after almost a decade of service? In any case, Neuer soon came out in Dr. Braun’s defence on his Facebook page, saying he was “absolutely not to blame” for his injury woe.

“The media today are giving the impression that Dr. Volker Braun is responsible for the development of my injury, because he did not apply the ideal treatment methods,” he wrote. “I categorically dispute this. Bayern’s former team doctor is absolutely not to blame. I can even assure that he applied the very best methods that modern medicine allows.”

With Dr. Braun gone, there is a void in the treatment room. It would be no surprise to see the 75-year-old Muller-Wohlfahrt back working his magic on a more active basis in the coming weeks.

Dubbed “a phenomenon” by Bastian Schweinsteiger and “a genius” by president Uli Hoeness, the healing hands of Muller-Wohlfahrt continue to treat a long list of Bayern stars, including Arjen Robben, Jerome Boateng and Robert Lewandowski, even though he is not officially on the club’s payroll.

Usain Bolt has been a patient at his downtown Munich practice since the age of 18 and devoted an Olympic gold “to a man with a big heart,” even handing over his world-record breaking shoes as a gift.

The veteran medic left the club in rather ugly fashion, while his close friend Hoeness was still languishing in prison. However, fast forward to 2017, and it is a time when the old guard is reforming under Heynckes.

In order to smooth the 72-year-old Heynckes’ return, Bayern paid around €2 million for a 65-year-old assistant coach in Peter Hermann from second-division Fortuna Dusseldorf, so it would be no surprise to see the 75-year-old “Mull” using his magic potions on a more active basis in the coming weeks.