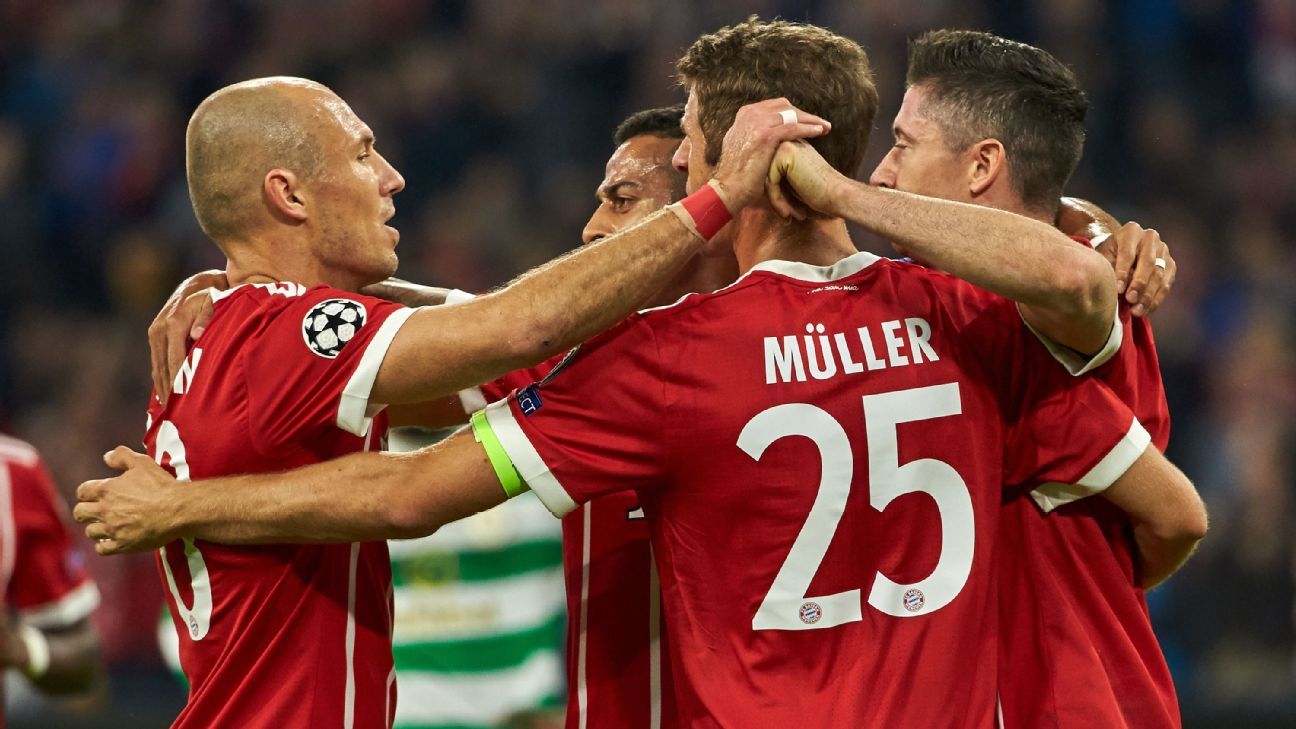 
Matchday 3 at last brought the first wins for the German contingent in the Champions League and underlined the recent return to form of RB Leipzig and FC Bayern Munich. For Borussia Dortmund, however, the 1-1 draw at APOEL has had the opposite effect: the Black and Yellows are beginning to wonder about their football’s true quality in light of four unconvincing games (three defeats, one narrow win at Augsburg) on the trot.

After two unsuccessful outings in the Champions League, coach Ralph Hasenhuttl left his suit at home and donned some fine knitwear for FC Porto’s visit to Saxony instead. Sartorial superstition didn’t so much make the difference as the home side’s relentless, unbearable pressing. Sergio Conceicao’s men were overrun by the white shirts in midfield and couldn’t live with the pace of their attacks, either. Three goals from Willy Orban, Emil Forsberg and Jean-Kevin Augustine in Tuesday’s 3-2 win announced Leipzig’s belated arrival on the European scene; in the end, they were as devastating as they were throughout their first season in the Bundesliga last year.

“We were world-class in the first half,” said midfielder Kevin Kampl of his side’s most convincing spell before the break. Leipzig had indeed moved with the kind of synchronicity that only the very best teams can achieve but they had fared rather less well when it came to some more prosaic tasks, such as picking up opposition players in their own box. Porto’s two goals, by Vincent Aboubakar and Ivan Marcano, were the results of such oversights and stand as a lesson that “you get punished more quickly in the Champions League than in the Bundesliga,” as the outstanding Forsberg said.

If Hasenhuttl can get those basics right, too, his side look poised to grab a few more prominent results before their debut campaign on Europe’s biggest stage is over.

There are times when you completely outplay your opponents, create a bucket-load of chances and still somehow end up drawing the game. This was not one of those occasions. The 1-1 result in Cyprus — a serious, possibly fatal blow to Borussia’s aspirations in the competition — was made worse by the fact that the visitors didn’t deserve more for their sloppy, dishevelled performance.

Dortmund had much of the ball but a strange lack of direction and thrust. Attempts at increasing the pace and injecting a sense of urgency after the break only saw their non-existent composure give way to chaotic ineptitude. “The longer the game went on, the more we lost our way,” sporting director Michael Zorc had noticed, “it got very wild at the end, he had no structure in our game.”

It took Peter Bosz’ side until the very last minute of the game to come up with a telling move courtesy of some incisive running from Christian Pulisic but by then, a late winner for the Germans would have been harsh on APOEL. They had kept star striker Pierre-Emerick Aubameyang and his co-workers in the attacking department well at bay. “We didn’t make enough opportunities to score,” captain Marcel Schmelzer dryly observed.

Dortmund’s troubles go deeper. Or, to be more accurate: they go further back up the pitch. Bosz’s attempts at shoring up the defence with the introduction of Marc Bartra as a make-shift right-back did not solve the central problem of his side: there is no systematic, pressure-resistant supply chain from the centre-backs to the out-of-form central midfield. Neither Sokratis nor Omer Toprak are entirely happy to play forward. As a result, the early ball goes wide to the full-backs, who are defended more easily by opponents.

An early exit in the Champions League might yet prove beneficial if it frees up resources so they can concentrate on winning the league but in order to do that, Bosz needs to make the build-up play much more dependable and more resistant to the press. Booting long balls forward over the heads of Julian Weigl or Nuri Sahin, as BVB were forced to do in Saturday’s 3-2 defeat by Leipzig, does not play to the team’s strengths.

Roman Burki needs to up his game as well. The Switzerland goalkeeper might have been unfairly criticised for conceding a total of three goals that went in at the near post against Spurs and Real Madrid — “I can’t take anyone seriously who hasn’t played in goal himself,” he told WAZ last week — but there was no arguing about his culpability on Tuesday night. The 26-year-old made two bad mistakes in as many seconds to allow Michael Pote score the opener for APOEL. It’s now down to him to ensure that the backing he’s been given by the club and his coach is warranted.

Bayern Munich back on track

Jupp Heynckes looked and sounded as if he had to explain a painful defeat. “We squandered too many chances and were sloppy at the back — we were taking the game as won. That can’t happen to a team like us,” the 72-year-old remarked sternly. His men had, in fact, won 3-0 in relative comfort against Celtic on Wednesday night. But Heynckes was right to denounce a lack of focus, for a number of reason.

First, Bayern’s defensive organisation visibly suffered when Sebastian Rudy, an able and calm Javi Martinez stand-in, was replaced by the more combustible Arturo Vidal. “Our positional game was not good, we had to run a lot,” said centre-back Jérôme Boateng. The oomph and power, especially on the wings, has returned to the Bavarians’ game since Heynckes’ return but the rarefied precision of their counter-pressing from days gone by hasn’t… yet. The match was much more open as it should have been as a consequence. Boateng and Mats Hummels didn’t enjoy Celtic’s forwards constantly running at them in the latter stages.

Heynckes made a much bigger point, however. By concentrating on Bayern’s shortcomings, the manager reset the benchmark for his team: from now on, only perfection will be considered good enough. His own history in the job has told Heynckes that success on all fronts will only be possible if everybody at Sabener Strasse works relentlessly hard at maximising their strengths and minimising the weaknesses.

Long-forgotten details, such as strict punctuality and tidiness in the dressing room or the repetitive practice of sharp passing, have been re-established as principles, designed to push the team that little much further. The wins against Freiburg and Celtic, two opponents that Bayern were expected to make handle with ease, suggest that the salvaging job is firmly on track.