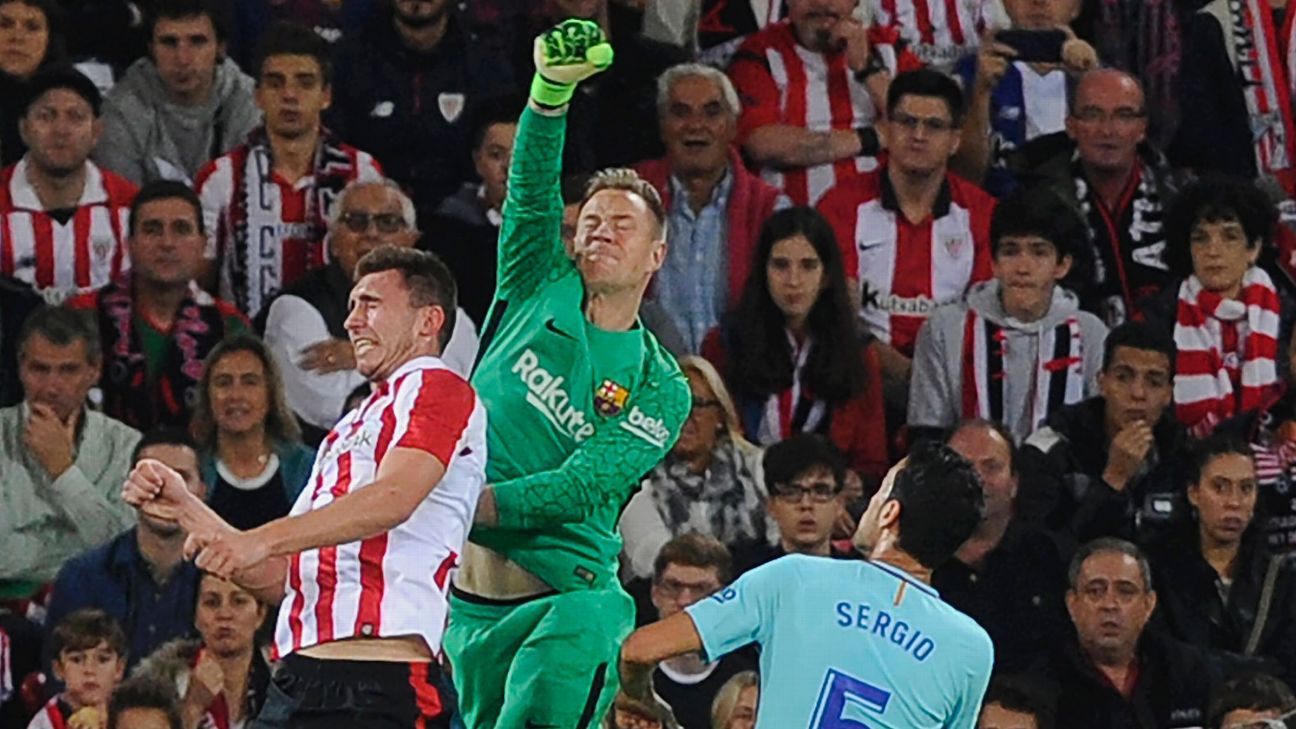 
Marc-Andre ter Stegen is refusing to write Real Madrid out of the La Liga title race, despite Barcelona building an eight-point lead over the reigning champions.

Madrid won their first league title since 2012 last season, but defeats against Real Betis and Girona have left them lagging behind Barca after 11 games this term.

However, Barca goalkeeper ter Stegen is determined not to let complacency set in at the Camp Nou and is more than aware of the threat still posed by Zinedine Zidane’s side, who also trail second-placed Valencia by four points.

“It will be a tight race until the end,” ter Stegen said at the presentation of Germany’s new kit, before looking ahead to the Clasico, which takes place at the Santiago Bernabeu on Dec. 23.

“It’s the Spanish league and we can’t allow any slip-ups. We need to be fully focused. We hope we can keep the distance between us and Real and hopefully, shortly before Christmas in an important match, we can extend our lead.”

Barca are unbeaten in 16 games in all competitions and a large part of their consistency has been down to ter Stegen and the defence.

The Germany international has conceded just four goals in 11 league games and striker Luis Suarez feels he is one of the reasons the Catalan side have made such a good start to the campaign.

“We feel really solid in defence and in midfield, which a while ago we didn’t,” Suarez told Diario Sport. “We’ve built a dynamic where you feel safe from the goalkeeper right through the team. I’ve had spells here where when teams get forward they score goals. Now they get to Marc and he’s at a great level.

“And in defence, the manager himself has doubts about who to play because everyone is at a good level. In midfield there are players scoring, running, helping… And that’s good, it’s making it tough for the coach to pick the team.”

However, Suarez himself has struggled for goals, scoring just three this season. He is currently on his longest streak without a goal since he joined the club (451 minutes) but is confident he can turn things around.

“I’m really critical of myself,” said Suarez, who has scored 124 goals in 161 games since he joined Barca from Liverpool in 2014. “There have been games when I’ve helped the team and been happy, despite not scoring. But other games have ended badly because I did everything possible to score and wasn’t able to.

“There are moments when you do everything and the ball doesn’t want to go in. Strikers are used to these situations and must live with them. I know I am obliged to score because it’s my job but also that the team’s doing well and hasn’t needed my goals.

“I have never been worried because I have everyone behind me. But it would be a lie to say I am happy with my form. I know I can give more. There’s not been any anxiety. I’m calm. I know that when one goes in, a lot more will start to go in.”