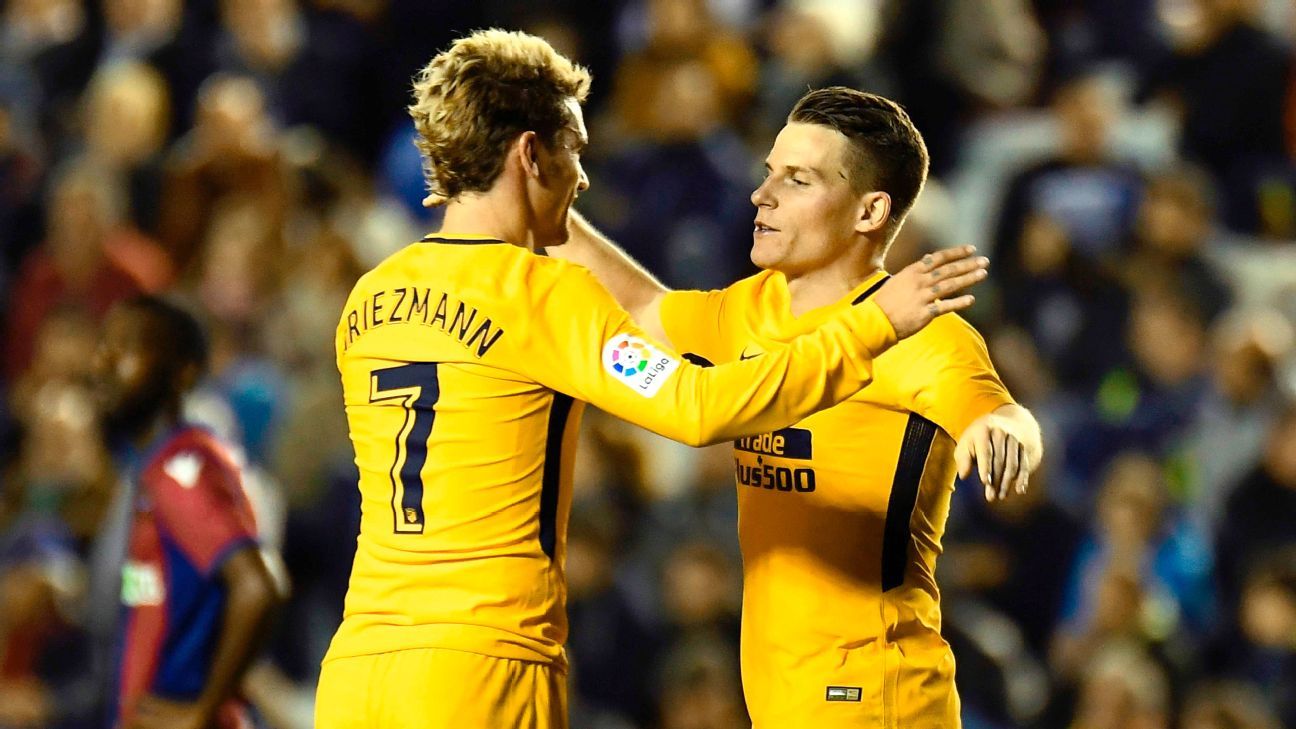 
Things can change quickly in the world of football. It is almost a month ago to the day that Atletico Madrid’s season reached a nadir as they fell behind at home to Qarabag in the Champions League. Truth be told they were lucky to come away with a 1-1 draw that all but condemned them to Europa League football and Thursday nights for the rest of the season.

It came during a wretched run of just one win in eight competitions, during which hopes of a La Liga title charge were extinguished. It was the same span when third-tier Elche secured a deserved draw in the first leg of their Copa del Rey last 32 encounter.

Fast-forward a few weeks and Atleti are in a much better place.

It appeared their hopelessness would continue after that desperate draw with Qarabag as they laboured away to Deportivo La Coruna. With the score tied at 0-0 heading into injury time and star man Antoine Griezmann having been acrimoniously substituted, things looked to be going from bad to worse. However, Thomas Partey stepped up to plant a free kick in the top corner and snatch three largely undeserved points.

At the time, it appeared that Los Rojiblancos had gotten a brief respite, yet the Ghanaian’s strike ended up meaning so much more. It appears to have been an emotional turning point in their season. Whisper it quietly, but the Atleti of old might be back.

A draw with neighbours Real Madrid followed, before the club claimed their first big victory at their new Wanda Metropolitano stadium, by easily seeing off Roma 2-0. They outclassed a side that had made Chelsea look foolish in two group-stage meetings. While it has become a story of what might have been for Atletico, it’s better later than never for their resurgence. The span also saw Griezmann end an eight-game goal drought with a spectacular overhead kick to rediscover his mojo.

While a player of Griezmann’s class was always going to get back on the horse, what is more surprising is the renaissance enjoyed by Kevin Gameiro this past week. Dogged by fitness issues since coming from Sevilla in the summer, Gameiro has rarely been fully fit. The way he took his goal against the Italians indicated he might be nearing his potential, and his impressive cameo was rewarded with a start against Levante on Saturday.

To say the goal did his confidence a world of good would be an understatement. He scored two and set up three in a 5-0 win away from home and looked every inch the €35 million striker Atleti thought they had signed but not often seen. Granted, it was against a lower mid-table side, but those were the kind of games in which Los Colchoneros had become unstuck earlier in this campaign.

Atleti as a whole have shown what a galvanising impact a goal can have on their collective confidence, while Gameiro this past week has demonstrated how it operates on an individual level. Fans will be hoping against hope that two of their misfits can this midweek channel their inner Gameiro to rediscover their magic touch.

Luciano Vietto, who made football look so difficult earlier on this season, and Nico Gaitan will be afforded starts against the lowly visitors and given one last chance to show they have a future at the club beyond January. It would take a comeback of massive proportions if the Argentine duo are to have long-term futures in the Spanish capital — so inept have their performances in Rojoblanco been — however, this is football and stranger things have happened.

Vietto has been a centre-forward in name only since moving from Villarreal two years ago. His last goal in any form of football came in December 2016 against third tier opposition. He was given a run to show he could establish himself as a regular partner for Griezmann earlier on this campaign, but instead did himself no favours and now is regularly out of the matchday squad.

With Gameiro firing and in favour — not to mention Diego Costa’s January arrival — Wednesday’s tilt against the Valencian outfit could well be the only chance Vietto has to ensure his goal drought does not reach the one-year mark.

Gaitan, meanwhile, has not fared much better. His best match in Madrid remains as an opposition player and has not netted since January this year. Vitolo’s arrival in the winter market only puts his place under more jeopardy, and he must use this opportunity to showcase his ability.

Failure to do so for either will condemn them to the scrapheap and will likely be the final chapter of their Atletico Madrid careers.