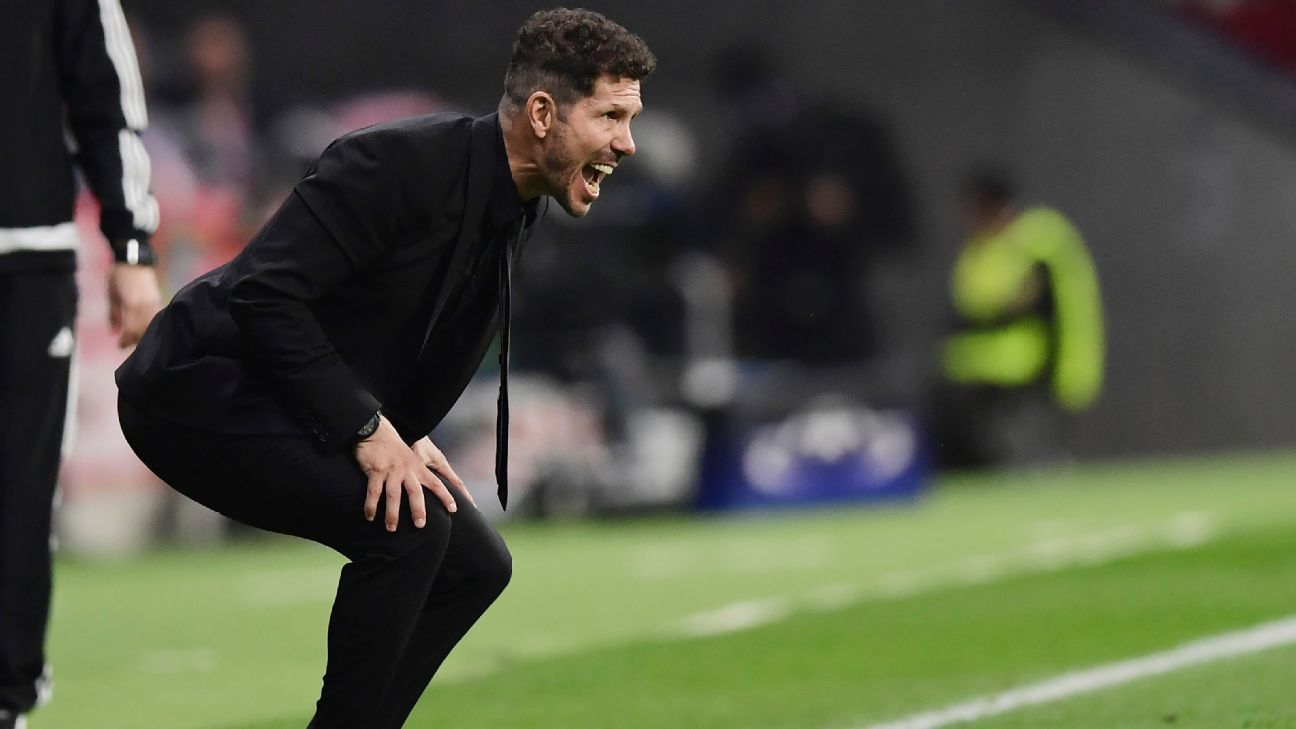 
How brutally painful it will be for Atletico if Theo Hernandez lines up against them in the Madrid derbi on Saturday night. Not simply because he committed the ultimate “betrayal” for a Rojiblanco player, debunking to the “Royal” side of the Spanish capital, but because he’s actually listed as one of the rule breaches for which FIFA punished Atleti by prohibiting them from signing and registering new players for two transfer markets (summer and winter 2017).

It’s a punishment that has dumped sufficient sand in the high-octane fuel tank via which Atleti had been entertaining us for five years, slowly grinding them to a walking pace.

Theo and his brother Lucas, who may start at left-back for Diego Simeone’s team, came to Madrid from France, when their dad played for Atleti, and never moved home. Yet in FIFA’s original judgement their signatures, while U-18, counted as offences in the governing body’s purge against the movement of “minors” in world football. That was patently faulty and eventually, FIFA admitted that not all the cases against either of the Madrid clubs could be proven.

Was it “just and proper” that Madrid had their ban reduced to just one “prohibited” transfer window while Atleti lost their appeal and won’t be able to register and use new players (Diego Costa, Vitolo) until January?

When both FIFA and the court for arbitration in sport agreed that Madrid’s offenses were less serious than their neighbors, then perhaps we can take that at face value. After all, the original case against Los Blancos included Zinedine Zidane’s sons: kids who had moved to Spain because of their father’s work, not because they were recruited as promising under-age football talents. (In short, an identical case to the brothers Hernandez.)

But when the verdict was announced last summer and Atleti’s band was upheld, the club’s response was that “this injustice will do the club irreparable damage.” Irreparable may be too strong, but damaging it has been.

Overall, the swingeing punishments, the rationale behind them and the level of “appropriateness” leave FIFA looking in the wrong. But that won’t help or console Atleti if Theo starts instead of, or replaces, Marcelo on Saturday.

The 20-year-old defender is a curious repercussion of all this. Raised with his brother Lucas in the Atleti cantera since they were 10 and 11 respectively, they were both sufficiently talented for Pep Guardiola to make them a priority on his arrival at Manchester City in summer 2016.

Atleti’s Managing Director, Miguel Angel Gil, admitted at the time that “we received an important offer for the brothers from City.” That the Champions League finalists of just a few weeks earlier flatly rejected the offer and offered the two youngsters new deals indicated what kind of trajectory the Hernandez brothers were expected to enjoy under Simeone.

Theo was loaned out to Alaves to gain experience, without having played once for Atleti’s first team, and then chose to further his career (and improve his wages) with Madrid instead. The Spanish champions could both sign and play him because (yes, you guessed it) as opposed to Atleti, their ban had been reduced and they were able to be active in the summer 2017 transfer market.

Have Theo’s handful of months at Real Madrid been revolutionary? No, and that’s not my argument. Does he profile as being the player to actually rip the derbi out of Atletico’s hands and give Los Blancos three vital points plus the bragging rights in the very first battle of the Wanda Metropolitano? That would be a bit fanciful too.

Nevertheless, the fact that he’s not in the Rojiblanco squad, pushing colleagues to more intense competitions for places, is a metaphor for how badly the FIFA ban has affected Atleti and explains to some extent why they are looking so moribund, such a pale imitation of themselves.

From the instant Atleti’s that Argentinian patron saint took over the club, until today, Simeone has been “Mr. Intense.” His ethos, demands, attitude and the atmosphere he attempts to create around the club’s training ground most resemble Sir Alex Ferguson’s work. Whether Simeone proves as shrewd, durable, inspirational and adaptable to changing trends in football, we’ve yet to learn. But Simeone and Ferguson share at least one pulsatingly important trait: they have the capacity to squeeze every last drop of commitment, excellence, hunger, ambition and competitiveness from a player.

The pair inspire. They are contagious. They teach. They exhort. If necessary, they bully a little. Each of them has unfairly been categorized as, simply put, a man to whom you wouldn’t dare take an under-par performance, branded as ruling by shock and awe.

Yet this wasn’t true of Ferguson and despite the “win at any costs” ferocity Simeone displayed as a player, nor is it true of the Argentina ex-midfielder either. Like his Scottish footballing forebear, Simeone possesses subtlety and humanity — accumulated wisdom. But Ferguson’s template — and it’s an important one given his sustained success — laid down a dictum for Simeone. The success that each man brings comes with a bill: burnout. Not simply of the physical “run, run, run!” kind, but mental too.

A psychological limit is reached when, for most players, they are asked to render their absolute maximum every single day. Only the true greats can sustain that year after year after year. Most suffer from a sell-by date.

Then there is the concept of saturation. Pep Guardiola knew, as did his players, that in his fourth year at Barcelona, the burnout/saturation point had been reached thanks to his ultra-intense demands. So he left. Ferguson’s choice was to stay at Man United but mimic the actions of a good gardener. In football terms, he knew to ruthlessly lop the heads off once-colourful, blooming flora whenever there was a hint that the leaves were about to turn brown, and when regeneration was needed. You know their names.

Notice how at Atleti, Simeone (and his football department, who needed to organize the replacements) coped and indeed flourished while stars like David Villa, Diego Costa, Thibaut Courtois, Diego, Toby Alderweireld, Miranda, Filipe Luis and Arda Turan all moved on? Back then, there was the chance not only to transplant new, eager talent into the Atleti bloodstream but to show or tell the remaining stars “unless you react and up your game in the face of new, incoming talent then you’ll be gone too…”

Ferguson always argued it like this. “The hardest thing is to let go of a player who has been a great guy. But all the evidence is on the football field. If you see the change and the deterioration, you have to start asking yourself what it is going to be like two years ahead.”

It was back in the spring of this year that Simeone gave an interview admitting that he’d warned his employers of trouble he saw ahead in that “[Diego] Godin is getting on, so is Juanfran and Gabi is getting older too.” In the meantime, you could point to several others in his squad for whom age isn’t the problem, but focus and attitude may well be. Not by much, but enough.

Yet thanks to the FIFA ban, there has been a barrier to Simeone making the kind of strategic, dramatic and vital changes to this seemingly exhausted squad of his that Ferguson would have advised him to address. Almost as bad is the fact that all his players, including those who have become subconsciously aware that their position is not under any threat, know the situation has been completely out of Simeone’s control. “You have to achieve a position of comprehensive control,” Ferguson argued. “Players must recognize that as manager, you have the status to control events.”

For Atleti, the title is already out of touch even given the much vaunted arrivals of Diego Costa and Vitolo in January. Survival in the Champions League looks unlikely at best. Both of those facts, even beyond baptizing the new stadium with a first-ever derbi win there, mean that victory over Madrid is utterly vital on Saturday.

In such a hot-house atmosphere, a simple win over Madrid (no matter how it’s achieved) could temporarily cover a multitude of problems. However, even with a victory, Simeone will be left knowing that if he’s sincere about staying for several more seasons and making them successful, then next summer needs to be the start of a severe and perhaps even shocking process of paring, dead-heading and brusque regeneration that would make Ferguson nod with approval.