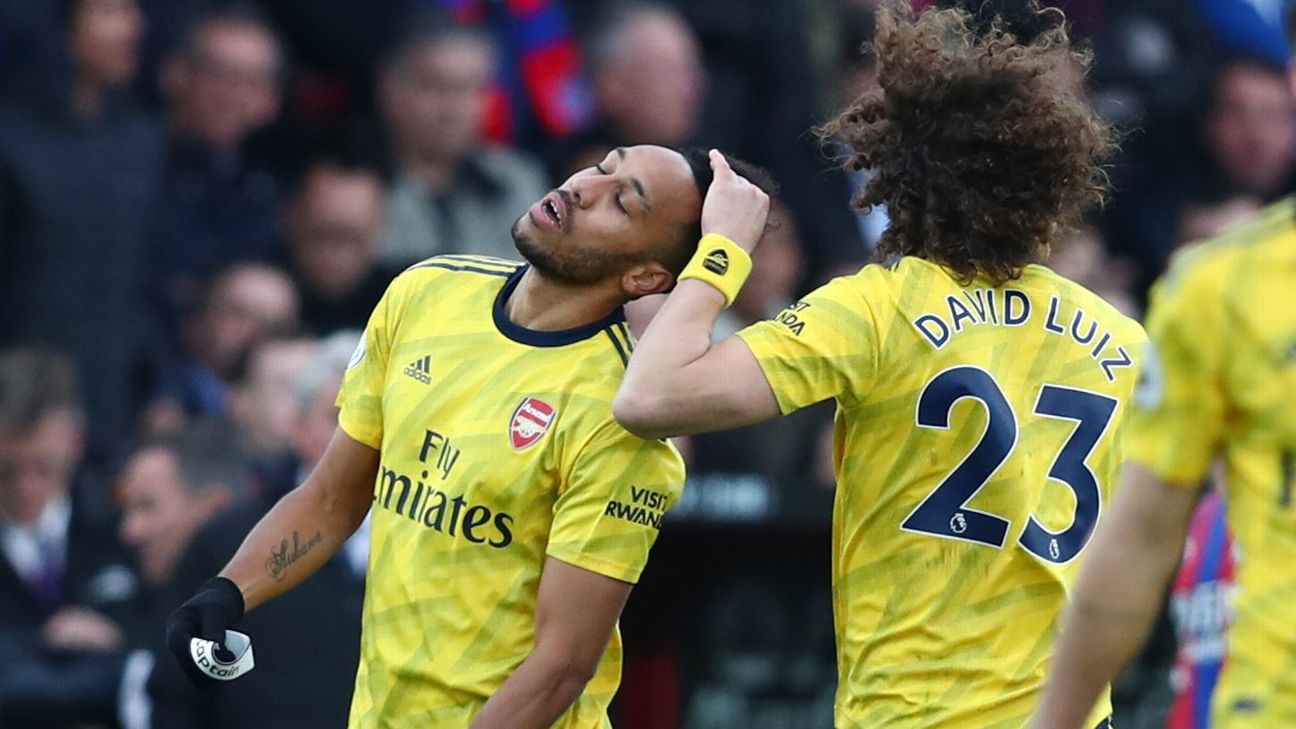 
Arsenal’s inconsistent start under Mikel Arteta continued after they relinquished an early lead to draw 1-1 with Crystal Palace at Selhurst Park.

Pierre-Emerick Aubameyang gave the visitors the lead in the 12th minute after good work from Alexandre Lacazette, and after Palace leveled in the 54th minute via a deflected Jordan Ayew effort, Aubameyang’s yellow card for a poor tackle on Max Meyer was converted to a red via VAR.

The Gunners’ goal came as a result of an excellent start to the game that saw the north Londoners display bundles of aggression off the ball, while showing intensity and nous in possession to open up space to allow Aubameyang to drift inside and cause significant damage.

After going ahead you would have expected the visitors to build on their early platform, but it went the other way as Palace grew in confidence, and it wasn’t until late on that Arsenal carved open a second significant chance. A lack of creativity wasn’t the only problem, as defensive frailty reared its ugly head once again as they switched off at a free kick, allowing Palace to take advantage and equalise.

6 — Arteta chose to play all his attacking cards from the start, but the four-pronged attack doesn’t appear to be clicking on the road, and the gaffer may well need to head back to the drawing board to find a winning combination up top.

GK Bernd Leno, 6 — The Germany international’s only save in the first half was a comfortable parry from a Cheikhou Kouyate effort, but he could only watch as Ayew’s strike took a wicked deflection off David Luiz and looped over him into the net for 1-1.

DF Ainsley Maitland-Niles, 7 — The right back held back from an attacking point of view to effectively keep an eye on Wilfried Zaha, whilst also giving license to fellow full back Sead Kolasinac to bomb forward on the Arsenal left. Booked early in the second half for a foul on Kouyate.

DF David Luiz, 6 — The centre half enjoyed an excellent start which saw him spray the ball from deep, and the ex-Chelsea man started the move for Arsenal’s opening goal with a pass that cut through the Palace midfield and into the final third. An unfortunate deflection wrong-footed his goalkeeper to give the home side their equaliser.

DF Sokratis Papastathopoulos, 6 — The big man was on hand to clear off the line in the 78th minute as Palace pushed for a late winner, and had a solid game.

DF Sead Kolasinac, 6 — The Bosnian had plenty of opportunities to foray into the final third, but needs to work on his final ball, as this wasn’t the first time this season that he was wasteful with his end product.

MF Lucas Torreira, 6 — Looked comfortable as the deepest midfielder in the Arsenal engine room, and was enjoying the physical battle as Palace looked to wrestle themselves into the game. Took a knock towards the end of the first half and was replaced at the interval by Matteo Guendouzi.

MF Granit Xhaka, 6 — The Swiss international had a spring in his step in the first half, and moved the ball excellently as Arsenal looked to exploit spaces out wide against a home side that looked to restrict play in the middle of the pitch, but he struggled to get a grip of things in the second period.

MF Mesut Ozil, 5 — Played his part in the opener with a neat lay off for Lacazette, but as Palace worked themselves back into the game following a tough opening quarter of an hour, we saw very little of the German. Withdrawn after 69 minutes for Gabriel Martinelli.

MF Nicolas Pepe, 5 — Almost won his side the game late on as he drilled an excellent effort against the post, but it was a disappointingly quiet showing from the Ivorian, who earned himself a yellow card in the closing stages of the first half for a fairly innocuous coming together with Crystal Palace midfielder James McCarthy

FW Alexandre Lacazette, 6 — The Frenchman dropped deep to pick up the ball and dig out a pass for strike partner Aubameyang to stroke home the opener. Eventually booked for persistent fouling in the final minute, before coming off for Reiss Nelson.

FW Pierre Emerick Aubameyang, 6 — Took a pass brilliantly into his stride to make the second touch an easy finish into the bottom corner to put Arsenal ahead for his eleventh goal in 17 London derbies, but his game ended after 66 minutes when his yellow card for a clumsy yet nasty tackle on Max Meyer was upgraded to a red by VAR.

Matteo Guendouzi, 6 — Had a tough assignment following Aubameyang’s red card., but plugged away.

Gabriel Martinelli, 6 — Almost worked himself a chance in the final quarter of an hour but was crowded out by Palace defenders.

Reiss Nelson, N/A — No time to make an impact.