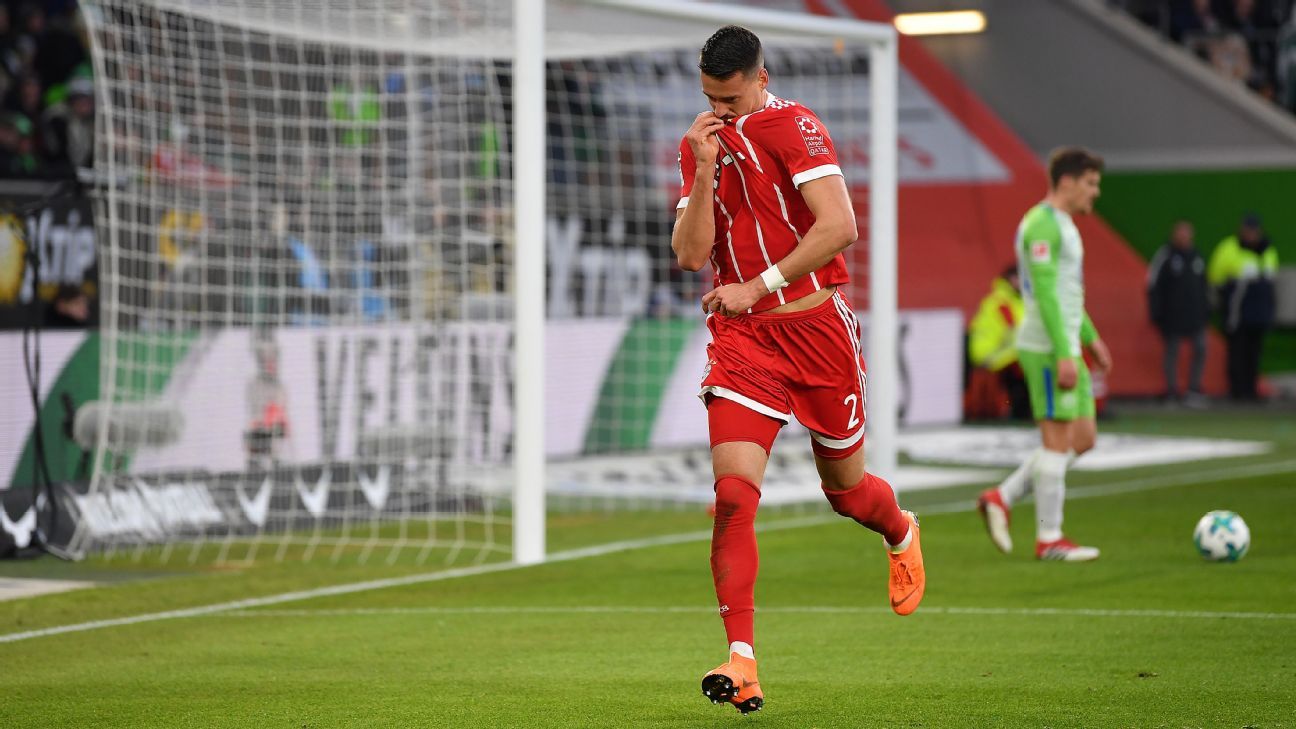 
Sandro Wagner’s header and substitute Robert Lewandowski’s penalty sealed Bayern Munich’s last-minute comeback 2-1 win against Wolfsburg, who had the temerity to take the lead through Daniel Didavi in the eighth minute. The Bundesliga champions could even afford the luxury of Arjen Robben’s missed penalty nine minutes after the break.

A sixth consecutive Bundesliga title is a matter of weeks away, maintaining a massive 18-point advantage over “nearest challengers” Leipzig with 12 games remaining. Bayern would have to lose seven of those for any sign of a rare title race breaking out.

A heavily-rotated Bayern “B” side put in an awful first-half performance against relegation-threatened Wolfsburg. More is needed even against unfancied Besiktas in the Champions League.

7 — Happily recovered from the flu which forced him to oversleep during last weekend’s win over his former side Schalke, Jupp Heynckes took the opportunity to wield the rotation axe with Tuesday’s Champions League game against Besiktas very much in mind — as Bayern sealed their 21st win in 22 games since he returned in October.

GK Sven Ulreich, 7 — Hardly tested and had no chance for the shock early goal on his 200th Bundesliga outing (176 for Stuttgart).

DF Rafinha, 6 — Replaced the resting Joshua Kimmich at right-back with the normal, no thrills, but diligent performance.

DF Niklas Sule, 6 — Always a threat at set pieces, Bayern’s summer signing from Hoffenheim slotted in for his 18th Bundesliga appearance of an impressive first season.

DF Juan Bernat, 4 — Came in for David Alaba at left-back, but was badly caught out for the goal. Seemingly having his feet stuck in clay, Didavi easily outjumped the Spain defender at the far post.

MF Sebastian Rudy, 5 — Started three out of last four league games, but will find himself on the sidelines in the Champions League on this form, giving the ball away too often and providing little attacking thrust.

MF Thiago Alcantara, 6 — His first game in 87 days since tearing a thigh muscle against Anderlecht. Cautioned for a lunge on Renato Steffen before the half hour mark, putting in an hour shift before Thomas Muller entered the fray to chase an equaliser. After such a long injury break, it’s unlikely that Heynckes will ask Thiago to turn out again on Tuesday in the more important CL game.

MF Corentin Tolisso, 6 — Largely anonymous in the first half, Bayern’s record signing won the penalty which Robben squandered and went close himself shortly after in a more enterprising second period.

MF Franck Ribery, 4 — Bayern’s longest serving player was handed the captaincy, but could easily have been sent off for lashing out at Steffen in the first half. His horrible cross — straight out of play, behind the goal — summed up his ineffective performance before he was finally put out of his misery and hooked off on 66 minutes.

MF Arjen Robben, 7 — The Dutch master was the driving force behind his side’s comeback, recovering from a missed penalty on 54 minutes, his first unsuccessful spot-kick since extra-time of the excruciatingly painful 2012 Champions League Final. Undeterred, he set up the equaliser with a sweet cross for Wagner and also won the last-ditch penalty, from which Lewandowski sealed the victory.

FW Sandro Wagner, 6 — After hardly touching the ball in the first half, he showed more presence after the break and “Wagner’s Overture” was music to the ears, burying the equaliser with a firm header. This was exactly the type of game Wagner was brought in for — to allow Lewandowski to be wrapped in cotton wool before Champions League ties.

MF Thomas Muller, 7 — Replaced the returning Thiago on the hour and immediately played his part in the equaliser, assuming the captain’s armband after Ribery’s substitution.

FW Robert Lewandowski, NR — Gave his backup Wagner a breather with 11 minutes remaining in another substitute appearance against the Wolves. Bayern’s top scorer couldn’t provide any of the five goals in nine minutes antics of 2015, but did add his 20th league goal of the season from the spot to seal their 10th straight Bundesliga success, as he nears a century with 97 goals in 118 appearances.