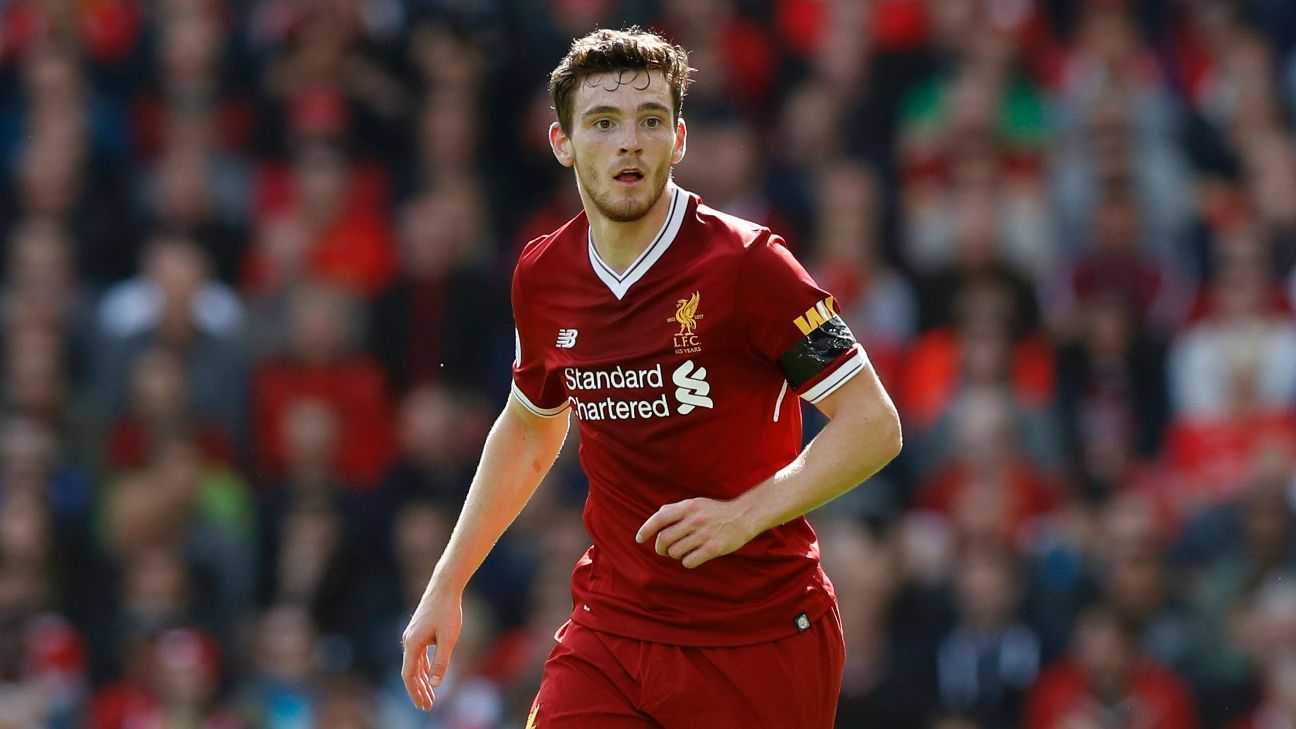 
LIVERPOOL — Andrew Robertson’s path to becoming Liverpool’s starting left-back has not been well-trodden. There have been a number of fortunate moments in the 23-year-old’s career that have helped take him to where he is now, but there is no doubt his talent and adaptability have been the contributing factors to his remarkable rise.

“Any luck that he has had then he’s more than earned,” Gardner Speirs, Robertson’s manager at Scottish amateur side Queen’s Park, tells ESPN FC. “Everything he’s had to do, he’s met it head on. He’s first class. He’s so determined, so ambitious and it’s wonderful to see.”

Within the space of six seasons, Robertson has gone from playing in the Scottish third division, where he was holding a part-time job at Hampden Park in order to earn money, to being a significant part of a Liverpool side pushing for honours both domestically and in Europe.

It all began with a setback, of course. Having been released by his boyhood Celtic at the age of 15, Robertson moved to Queen’s Park, a team in Glasgow with a reputation for giving young players a platform.

“Sometimes when they get told they don’t think they’re going to make it, you can go one or two ways when that happens,” Speirs says. “You can feel sorry for yourself or you can take it upon yourself that you’re going to become a footballer.”

Robertson’s breakthrough in Queen’s Park’s first team was the first fortunate break that ignited his professional career, but from then on, it was all down to his own making.

“I was aware he was playing in the under-17s. We were away for a few days in preseason and we had just lost a left-back, so we took Andrew along,” Speirs says. “I’m sure he was back from holiday the day before or something like that. We took him along. We had a training base for four or five days.

“He played in the very first game of preseason and he played so well that he was with us for the rest of the season. It was quite amazing.

“It really was just down to pure circumstance that we took him on that preseason trip. He played and he was excellent. We couldn’t take him out of the team.”

Just one season with Queen’s Park’s senior side saw Robertson elevated to the Scottish top flight, joining Dundee United at the start of the 2013-14 season. Again, a solitary campaign there led to Robertson earning his first Scotland appearance and sealing a £2.85 million move to Premier League side Hull City in the summer.

As it happened, Hull’s chief scout, Stan Ternent, first came across the full-back by pure accident. Ternent took a seat in the director’s box at Kilmarnock’s Rugby Park, on a mission to look over another Dundee United player.

Unconvinced by what he had seen from his initial target, Ternent happened to be suitably impressed by the teenage Robertson. After a follow-up observation at Hibernian a few weeks later, Ternent put forward his recommendation to then Hull boss Steve Bruce.

“I rang him at half time and said: ‘We’ve got to take him’. That’s how it came about,” Ternent tells ESPN FC over the telephone. “I watched him twice. Sometimes when you see somebody you just know.”

Now at Liverpool, Robertson is fully grasping his opportunity in Jurgen Klopp’s team after a rough start. By December, there was 10 occasions where Robertson had been omitted from Liverpool’s matchday squad in the Premier League.

As a result of Alberto Moreno’s injury, Robertson has started eight out of the last nine league games, improving every time he puts on a Liverpool shirt. His tireless performance in the 4-3 win over leaders Manchester City earned vocal recognition from the Anfield crowd.

“He can handle it,” Ternent says. “Athletically, he can handle it. He’s strong enough and fleet enough to be able to do that. “He has the bollocks to do that, the temperament.

“He plays with freedom. He gives you 100 percent. There’s no hidden agenda with Robbo. What you see is what you get. That’s how he is. He’s an open, honest, good footballer. He’ll go on and on.”

Speirs adds: “He has a wonderful temperament. Nothing seems to faze him. I’m sure he does get nervous, but it certainly doesn’t come across in his play.

“The most impressive thing about him is just how he meets every challenge. He meets it and goes beyond it.”

Robertson has already become a popular member in the Liverpool dressing room — a joker of sorts, dishing it out just as much as he is on the receiving end.

Ternent and Speirs are quick to point out Robertson’s humbleness and personality at regular points during these interviews. For his 21st birthday, Robertson asked family and friends for donations to a food bank instead of presents.

“He’s just getting everything he deserves as far as we’re concerned,” Speirs, who is now head of the youth department at Queen’s Park, concludes.

“When we speak to parents, we mention Andy. We speak about how ability is important, but without that attitude and determination then ability isn’t going to be enough.”