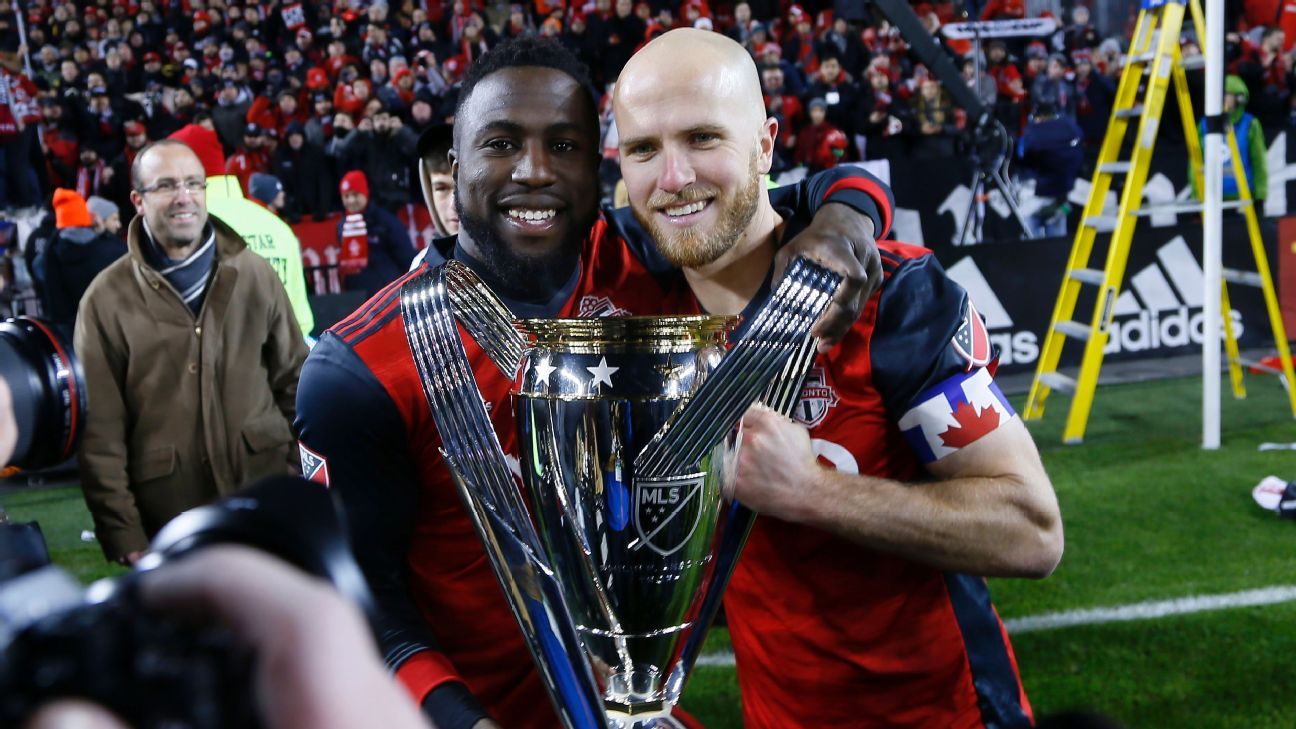 
TORONTO — Jozy Altidore and Michael Bradley have been teammates on a number of nights. As both players navigated their way through various national teams, there have been emotional peaks and valleys. It was fitting then that in a year filled with both extremes, the two finished on a high in leading Toronto FC to its first MLS Cup triumph, a 2-0 win over the Seattle Sounders.

Bradley was everywhere in leading Toronto to a dominating performance. According to ESPN Stats & Information, Bradley connected on 65 of 71 passes, while making 5 tackles, 6 clearances and 4 interceptions. He was part of a harassing midfield that never let Seattle breathe.

“He stifled them,” said Altidore of Bradley. “Before they even looked he was there. I was telling guys on the bench his bald head was everywhere.”

Altidore had to be a bit more patient. It seemed like everyone was getting chances but him, with Sebastian Giovinco and Victor Vazquez getting some good looks only to be denied by the brilliance of Seattle goalkeeper Stefan Frei. But when Altidore was presented with one chance, he made the most of it, taking a pass from Giovinco and lifting the ball over Frei for the eventual game winner. In the process, it washed away the bitter taste of losing last year’s final to Seattle in the same venue.

“To every single guy who has been a part of this road, this journey for the last year, it’s incredible,” Bradley said. “To cap it off [Saturday] in the way that we did, to play the way that did with everything on the line, with all the supposed pressure on our shoulders, I’m so f—ing proud.”

The fact that Altidore and Bradley were able to share the moment made it even more special. The two first met in 2004 when Bradley was exiting the U.S. residency for the U17 national team in Bradenton, Florida. Altidore was just arriving on the scene as a 14-year-old. Altidore recalled that the two clicked right away over their shared passion for the game.

“He’s exactly what he is now,” Altidore said of Bradley. “He had more hair, but he was just so serious, so professional, and he was [16] years old.”

“We saw in each other that we loved the game, we were into it, we were serious, we wanted to win,” Bradley said. “And since then we’ve had so many experiences together. He’s a brother to me.”

It was just two months ago that the duo shared a different kind of experience, the U.S. men’s national team’s soul-crushing failure to qualify for next summer’s World Cup. Both players have been front and center for the invective that has been directed at the team. The role the two played in Saturday’s triumph will no doubt lead to plenty of “Where was that two months ago?” reactions.

But sports, this one in particular, don’t work that way. A performance in a game can’t be called up on command. While the residual anger of U.S. fans is understandable, it’s still impressive that both players found a way to move on from the emotional blow and lead Toronto to the title.

Moving between club and national team commitments requires intense compartmentalization. Bradley insisted that doing so isn’t a process but a switch that must be flipped.

“There are moments when things are going well for your national team and not your club, things are going well for your club but not for your national team,” Bradley said. “Especially for me as captain, I have a huge responsibility that nothing carries over. I give everything I have in a given moment for the team that I’m playing on, and then when it’s time to switch gears, I switch gears like that.

“When we got back from Trinidad, I said that it wouldn’t be fair to any person here — our teammates, our coaches, our fans, any people part of this club — if we brought the anger, frustration or heartbreak over, because this team this year has been like nothing that I’ve ever been a part of just in terms of a group of guys together with the coaches, the staff with everybody upstairs at the club who were just so single-minded.”

Creating mental distance from what happened in Trinidad was helped by the physical distance from their home country. In fact, Canada might as well have been a world away. And the support the two have received from Toronto’s fans has helped both players move forward. Saturday was the chance to pay them back.

“It’s not easy,” said Altidore of shedding the national team disappointment. “But these fans made it easy by the way they supported us. They did sympathize with what happened, and they’ve just been terrific. To give them a night like this, it means everything.”

That is not to say that such memories will be erased. But now both players can celebrate a historic victory and share the first treble in MLS history.

“You’re not guaranteed anything. I’ve lived that on many different occasions,” Bradley said. “But when push comes to shove, I want this guy next to me every single time.”

Bale set for Tottenham start vs. West Ham, ‘a different player’ than at Real Madrid
Real Madrid, Barcelona edge in on Manchester United’s Fernandes
Everton are top of the Premier League and primed to end decade of derby futility vs. Liverpool
Tottenham’s lack of ruthlessness hurt them vs. West Ham and will stop them competing for trophies
‘Bad habit’ to blame him