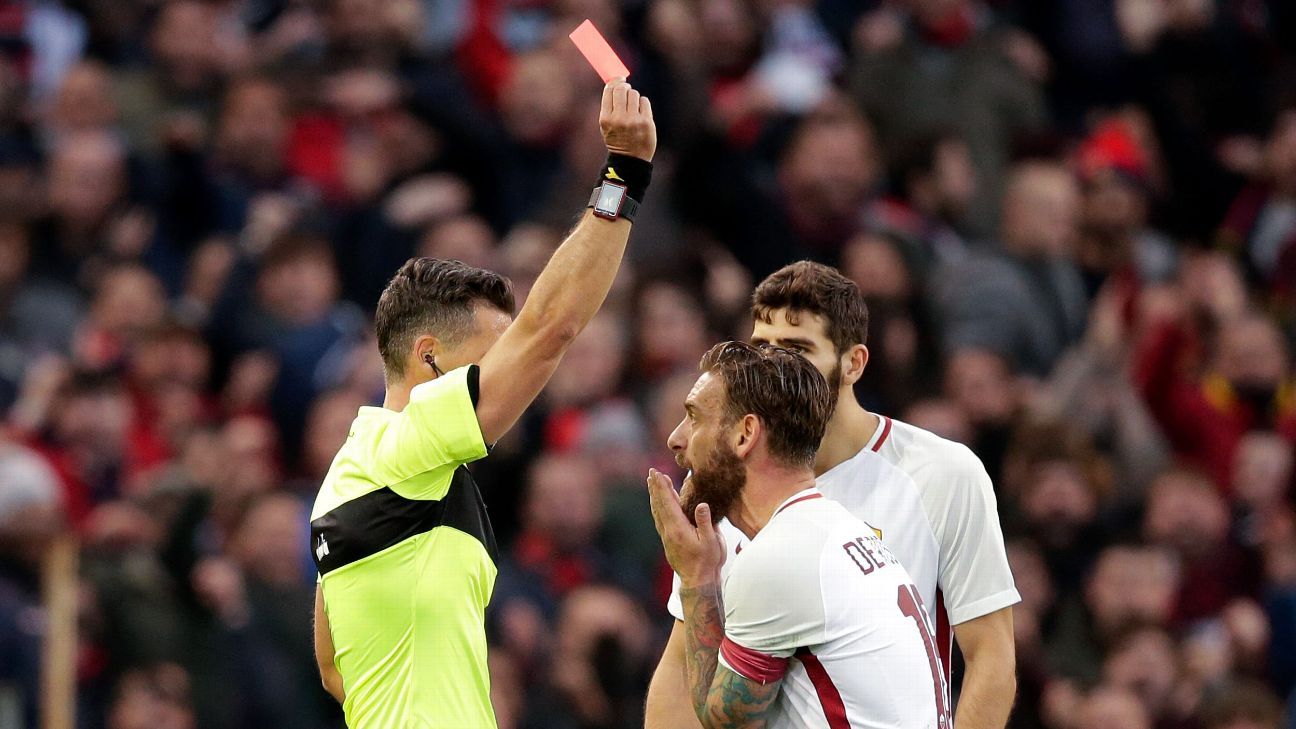 
Daniele De Rossi’s moment of madness at Genoa last week opened up an old wound. Having just watched Stephan El Shaarawy put his team a goal up, the Roma captain cost his side the three points by stupidly lashing out at Gianluca Lapadula while marking the Genoa man at a corner and then trying to cover his tracks by taking the most ridiculous dive. In the age of VAR, it’s harder to get away with that sort of cheap gamesmanship, and after consulting his video colleagues referee Piero Giacomelli pointed to the spot, from which Lapadula duly struck home the equaliser.

The game finished a goal apiece and ended Roma’s Serie A record run of away wins at 12. It also left them seven points behind league leaders Napoli (with a game in hand) and off the pace in the title race, but more importantly it also raised the spectre of an old Roma habit — shooting themselves in the foot. A clear signal that Genoa was a one-off and nothing else needs to be sent against struggling SPAL on Friday.

The 2-0 defeat at Atletico Madrid aside, Roma have recently looked like a team growing in confidence and gaining maturity, a team that is more solid than spectacular, but capable of keeping its head and grinding out results. De Rossi’s complete loss of composure — not for the first time in his career, it should be added — threw that burgeoning new identity into doubt. If the club captain throws a wobbly when a goal up against a team in the bottom three, what are the chances of a similar turn happening in tougher circumstances? With a trip to Juventus coming up in the festive period, it’s a question worth asking.

De Rossi apologised after Genoa for his stupidity (“the footage is ugly” indeed) and Roma didn’t appeal his two-game ban, but that hasn’t taken away the bad taste. As said before, this isn’t the first time he has damaged the team with his behaviour — his role in Roma’s humiliating exit from the Champions League playoff to Porto last season, which cost the club millions of euros, is another example — and at 34 years old you have to wonder if he is ever going to leave this sort of behaviour behind.

Despite being nicknamed “future captain” for most of his career, with the immovable Francesco Totti untouchable above him, the number of games De Rossi has played with the armband stretches well into three figures, so he knows the importance of his position. His reaction to his monumental meltdown against Porto was to have his best season in years, and though the heights he reached in his mid-20s are far off in the rearview mirror, he is still an world-class midfielder. With Totti frozen out by Luciano Spalletti long before he eventually retired, De Rossi also looked to have taken on board his position of responsibility, well before the torch was officially passed to him.

Thankfully in Maxime Gonalons, Roma have a worthy replacement ready to start against SPAL and then Chievo while De Rossi has a chance to make amends in Tuesday night’s do-or-die Champions League group stage finale with Qarabag. Friday is also the start of a nice run of fixtures that give Roma the chance to set themselves up nicely before the winter break.

Roma have seven games between now and the end of the year beginning with SPAL. After what should be a done deal with Qarabag, Rome have Chievo away, then middling Cagliari and Torino (in the Coppa Italia) at home before travelling to Turin for their crunch Christmas clash with Juventus. They then finish 2017 with Sassuolo — another struggling side — at the Stadio Olimpico. That’s five home games against inferior opposition to guarantee a place in the knockout stages and consolidate what has been, disappointment at Genoa notwithstanding, a good opening three months to the season.

Before Roma face Juve, Massimiliano Allegri’s side also travel to Napoli on Friday and then host Luciano Spalletti’s resurgent Inter next Saturday, so Roma should have a chance to either close the seven-point gap between them and leaders Napoli or move into the automatic Champions League spaces occupied by Juve and Inter. That’s if the weekend’s blip against Genoa remains just that.